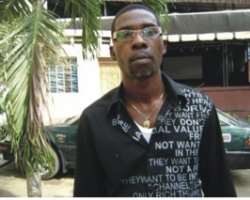 Pour am water, break bottle for im head, flog am, are some of the expletives you are sure to hear on the OPJ Wazobia traffic jam show. The simply hilarious show is a companion on the ever-present Lagos evening traffic as it eases the frustrations of the long hours.

Few topics are sacrosanct to this fellow as he belts out his ever perfect {if that could be used to describe it]] vernacular English to discuss everyday issues. His programme can be best described as a wild stew of talk, hilarious music, unscripted skits and unedited conversations with callers.

For over two years in Wazobia FM, listeners have been enjoying OPJ's gift for satire and incredibly funny innuendoes. Having worked in several radio stations, he finally cut his teeth in Wazobia radio station.Opute Pius Jnr, as he is also known, claims that he is the finest MC in the city of Lagos. As many a driver have nearly lost themselves laughing to his jokes, OPJ continues to romp through the issues of life while providing an eclectic array of music along the way, I recently caught up with the vernacular wizard.
Excerpts;

How did you come about the name 'DIPLOMATIC OPJ'?
It came out due largely that I always have an answer for any question; I do not grope for answers. People perceive that I had a diplomatic way of countering questions. There is no question I do not have an answer for.

How long have you been into broadcasting?
This is my 18th year in broadcasting in general, but two years with Wazobia.It might interest you to know that this is my first stint as a broadcaster in vernacular language and also, before that I used to be an English teacher in a secondary school. Some of my old friends still call me teacher “Olo Oyinbo”. I can stand on any pulpit an address any crowd in perfect English. I know English not as a subject but as a language.

How come the in-depth knowledge of vernacular language?
Might be because of my Warri background.

Interestingly, I have spent all my life in Lagos. My family home is in Ajegunle, a throwback to a Warri community. Though I have not been to Warri in 26 years, in my family home in AJ, we speak as though we are in Warri.

What was the magic in Wazobia that made you from virtually an unknown broadcaster to a famous one?
For me, Wazobia is a famous platform so I'm just caught up in the tide and riding along. Though I must add that I do not perceive myself as a successful person, just an individual on a successful platform. If Wazobia stops being famous, I will stop being famous.

Journey to Wazobia
I was just doing my normal weekend gig at Lekki Beach sometime ago when Mannie of Cool FM {they also own Wazobia], who was in the crowd came backstage and introduced himself to me and praised my performance, commending my flow of the vernacular language, in addition he invited me to their studios. One day, I was driving along Etim Inyang street in Victoria Island Lagos and then it suddenly occurred to me, “Yeah that Mannie fellow works here, I better take him on his word and pop in.

So, I got down from my car, walked in and asked of him. He was not around, but left instruction that I drop my voice in case I came around, this I did. Several months later, I got a call from a lady from the company and there! I was absorbed. So, Mannie brought me to Wazobia. He discovered me.

What other things do you do?
I know I'm funny, but I do not want to go into stand-up comedy, let those doing it have the playground although I still lend most of them jokes though no one can say it the way I do. Emceeing is my first love and I have made my mark as a DJ, having played in over 14 clubs in Lagos and I'm still doing it.

Inspiration
Our concepts are natural inspirations, which just fly around in the air and we just catch it. There is no institution where talent and creativity are taught. It comes naturally; we do not premeditate what we say.

Is that the real you or is it all an act?
That is me, all of me. Nothing is hidden and anything you hear from me comes from deep within me.

Who is OPJ?
Is one person a lot of people would describe as amiable, interesting and humane? I'm sure that is why people who relate with me like me so much. My biggest problem is my over-generosity.
My fortunes now are better, but for me, life is always beautiful although I'm not a normal person. I do not believe in religion or prayers, I do not pray and I am not a member of any religion. I have never been to the hospital and people close to me do not go to the hospital so invariably I will never go there. I am a naturalist. I am a god and God is in me. The two of us are one, we are inseperable. As long as I live, God lives. I do not confess or talk death; it is only sinners that die.

Female admirers;
Oh, you mean the ones that call me on-air. Well, I am not a womanizer because of my spiritual approach to life as I have come to realize that women are the only weapon fashioned against men by satan that actually works, I am so careful that I even dis-associate myself from womanizers. Though I must add I do not like ugly-looking women, I do not even like them near me.

Family life;
I have three beautiful children including two equally beautiful adopted ones.

Background;
I am from Ibrede town in Isoko; Delta State.I grew up in Ajegunle, Lagos and spent most of my life there. AJ is the only village I have, I'm street-wise and after I sign off my programme, I hit the streets of Ajegunle to be with my peeps.

Your music-selection;
I do not play known stars, I rather play the up-coming ones because I intend to promote them and believe they are play better music than the popular ones. Although for me, Nigerian artistes have not started playing the kind of music I like. In my car and at home, I prefer and play only Jazz, I'm foreign music-oriented.

This new generation music is just full of trash. Nigerian listeners also contribute to these because we are not good music critics, our value system is poor. Personally, your name and stardom cannot make me like your rubbish! In Nigeria as long as you are a known star, if you dish out rubbish, people will rush and buy it and will never give the upcoming ones a chance to prove themselves.