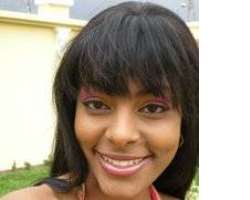 Pretty top actress, Soraya Mensah is pregnant, City People can reliably report. The short but sexy actress has been engaged to millionaire Ghanaian businessman Peter Ahiakpor. Though rumuors of her pregnancy have been flying around town for a while now, no one has been able to confirm it because she has not really been stepping out. However Soraya was spotted at a recent event where she could not hide her protruding belly.It is also gathered that the couple may be expecting their baby very soon.

The sexy look of the actress seems to have been affected by the pregnancy as she now appears to have put on some weight and one can hardly recognise her. Soraya's man is a rich businessman who has a chain of businesses in Ghana and Togo. The corporate headquarters of his company is located behind Action Chapel in Accra.

The man, Peter Ahiakpor also owns a number of choice properties in the Ghanaian capital city. He is also the owner of Explosive Gardens restaurant located around Achimota Hills. Soraya lives with him in their palatial mansion also at Achimota Hills in Accra. Soraya, who has a combination of Ghanaian and Lebanese parentaage burst onto the scene in Sparrow Production's 'Scorned' as Chris Attoh's girlfriend. She went on to feature in Venus Films 'Hail My Heart', 'Prince's Bride' and 'Material Girl.' She also played a supporting role in 'The Supremo' alongside Prince David Osei and Jackie Appiah.