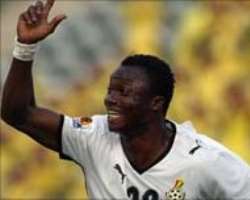 A statement on the club website said Partizan have an option to make the move permanent at the end of the season.

He almost put Ghana into the semi-finals of the World Cup when his goal-bound header was blocked by Uruguay striker Luis Suarez in the last minute of extra-time.

He was also the leading scorer at the Under-20 World Cup which Ghana won in 2009 – prompting Milan to sign him.