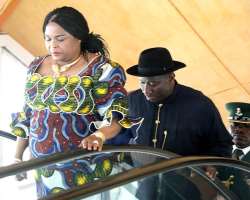 PRESIDENT GOODLUCK EBELE JONATHAN AND WIFE, DAME PATIENCE JONATHAN DURING THEIR ARRIVAL IN ADDIS-ABABA, ETHIOPIA FOR THE 16 AFRICAN UNION SUMMIT.
Listen to article

The President made the declaration in Addis-Ababa, Ethiopia during a session with Nigerians in diaspora.

President Goodluck Jonathan is in Addis-Ababa alongside the First Lady and Foreign Minister, Odein Ajumogobia to attend the 16th African Union Summit.

He assured the gathering of government’s big push towards improving security, power and infrastructure.

He said government was doing everything possible to arrest the poor security situation in the country. He disclosed that all those involved in the October 1 bombing had been arrested and were being prosecuted. He, however, said he ordered the release of the car dealers because they were just businessmen who could not have known that the vehicles they sold were going be used for the bombings.

“Without security, there is no government. So it is not debatable, it is something we have to addressed and we are working towards that with vigour,” he said.

Jonathan emphasized the significance of electricity to economic growth and vowed that if elected in April for a four-year tenure, the issue of poor electricity supply would be a ‘thing of the past.’

“If I’m voted into power within the next four years, the issue of power will become a thing of the past. Four years is enough for anyone in power to make significant improvement and if I can’t improve on power within this period, it then means I cannot do anything even if I am there for the next four years,” President Jonathan told the gathering mainly made up of Nigerian diplomat working at United Nations Economic Commission for Africa, UNECA, and the African Union, AU, in Addis-Ababa.

While responding to a question on why Nigerians living abroad are not allowed to vote, Jonathan said the electoral law does not permit voting from abroad but promised to work towards allowing Nigerians in diaspora vote in the 2015.

The President has left Ethiopia for Turkey on a state visit.