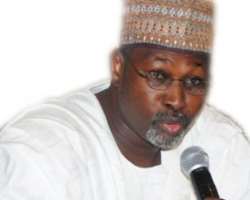 “We can authoritatively inform all Nigerians that the DDC machines being used for the nationwide registration exercise can only detect double/multiple registration if such registration is done at a particular machine. In other words, verification is only at the machine level and not at the server level,” the party said in a statement issued in Abuja by its National Publicity Secretary, Alhaji Lai Mohammed.

“That means anyone who registers in five different centres, for example, can indeed vote in all those centres without being detected. This is contrary to what Nigerians were told and it is a national calamity,” it said.

ACN, therefore, challenged the commission to disprove this claim by demonstrating to all stakeholders how it planned to detect double or multiple registration, adding that failure to do this, the Federal Government must set up a panel of inquiry to investigate how a whole country could be taken for a ride on an issue that is so critical to national survival.

The panel, it said, must find answers to the following posers: “Who advised INEC to procure a system that cannot detect double/multiple registration? Why did INEC lure Nigerians into a false sense of security that no one can get away with double/multiple registration? What, if any, is the level of complicity of the PDP-led Federal Government in this national calamity? What guarantee can INEC, and indeed, President Goodluck Jonathan, now give that April’s general election will be free and fair?”

In the meantime, ACN urged all opposition political parties, the Coalition of Democrats for Electoral Reform (CODER) and all genuine pro-democracy groups to meet urgently to find a way forward.

“It simply means that every time INEC wants to detect double/multiple registration, it will have to match each set of 10 fingerprints of a voter against 60 million sets of 10 fingerprints (assuming 60 million people were registered) and the technology procured by INEC simply does not have the capacity to do that. It took the British Police three whole years to establish a national finger print system, so it is not what INEC can do in three weeks.

“We are, therefore, left with no option than to conclude that the much-ballyhooed, N100 billion voter registration exercise will not produce a credible or accurate voter register. The voter register that will emerge will be packed full with fake names and riddled with double/multiple registration. Needless to say, therefore, that the forthcoming general elections will neither be free, fair nor credible,” it said.

To worsen matters, the information that the DDC machines could not detect double/multiple registration at the server level had apparently been leaked to the PDP, hence the propensity of the party to encourage and finance multiple registration across the nation during the ongoing exercise.

“The puzzle over why a state government will spend about N100 million, at N50, 000 per each of the 1,872 polling booths in the state, during the registration exercise, which has been fully paid-for by the Federal Government, is now gradually being solved. Equally getting clearer is why the same state government has been transporting people all over the state under the guise of facilitating the registration exercise,” the party said.

ACN recalled its numerous warnings that despite the much-vaunted integrity of INEC Chairman, Attahiru Jega, he was simply hemmed in within the commission by those who would not let him succeed, and that there was a limit to which one man could swim when swimming against the tide.

“We hate to say that our warnings have come to pass. We are saddened that the 2011 elections may not be different from the charade that the nation witnessed in the name of elections in 2003 and 2007 even as huge tax payers’ funds have been expended in what is now turning out to be the grandest deception of all time. If the whole process can still be salvaged, the time to act is now,” the party said.