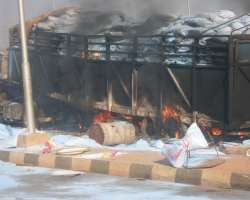 LAGOS, Jan 30, (THEWILL) - Human Rights Watch has said the renewed violence and incessant killings in Jos was due to the failure of Plateau State and Federal Governments to implement findings of different committees earlier set up to investigate the recurring outbreaks of violence in the city.

The 7-page report contained witness accounts of terror unleashed on the people of the state in the last decade, saying the governments “have not only failed to tackle the root causes of the violence, but have also failed to break the cycle of killings by holding those responsible to account.”


The report, titled Nigeria: New Waves of Violence Leaves 200 Dead and authored by HRW West Africa Senior Researcher, Mr. Corinne Dufka, said the governments “have set up various committees and commissions of inquiry that have examined these issues, but the reports from these bodies, and the occasional government white paper, have mostly been shelved.

“Despite repeated outbreaks of violence, the government has largely ignored the findings and failed to implement the recommendations. In all but a handful of cases, 17 Hausa-Fulani men were convicted by the Federal High Court in Jos in December 2010 and the perpetrators have not been brought to justice.

“The federal government, however, has taken some steps to beef up security in Jos and surrounding communities since early 2010. While the military presence has had some effect in deterring and responding to attacks, the underlying causes of the reoccurring outbreaks of violence remain,” Dufka wrote.

The report also frowned at the refusal of the administration of President Goodluck Ebele Jonathan to allow Special Adviser to the United Nations Secretary-General, Mr. Ban Ki-Moon on the Prevention of Genocide, Mr. Francis Deng, to visit the state capital and all the affected communities.

The report therefore urged the federal government “to act swiftly to protect civilians of all ethnicities at risk of further attacks or reprisal killings and to allow Special Adviser to the United Nations Secretary-General, Mr. Francis Deng, to visit the state capital and all the affected communities.

“These waves of senseless killings risk spreading and have taken a terrible toll on the people of Plateau State. The state and federal governments should urgently enlist anyone who can help break this cycle of violence. The most recent round of violence and reprisal killings was sparked by a series of bomb blasts.

“Since then, dozens of Muslims and Christians alike have been targeted and killed, often in horrific circumstances, based simply on their ethnic or religious identity. These latest deadly outbreaks follow a year of inter-communal bloodletting in 2010 that left at least 1,000 dead in the state,” the report said.

It also alleged that a deadly spate of sectarian violence in Nigeria’s central Plateau State since December 24, 2010 “has killed more than 200 people. The victims, including children, have been hacked to death, burned alive, disappeared, or dragged off buses and murdered in tit-for-tat killings.”