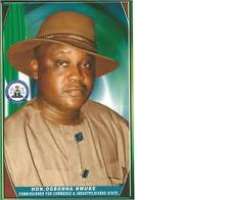 On January 6, 2011, the people of Etche/Omuma Federal Constituency elected Prince Ogbonna Nwuke as the Peoples Democratic Party's (PDP) House of Representatives hopeful for the constituency. Ogbonna, winning the primaries, has understandably made the Rivers State politics so interesting, in the forthcoming general elections in April.

Ogbonna has remained a myth-breaker in his chosen career – journalism. A renowned social critic, until his election to represent his people in the House of Representatives, he was a member, Rivers State Executive Council. Energetic and humane, Nwuke never overlooked the limitations of human strength, knowledge and accomplishments. However, he has never been deterred by these.

As a journalist, many people's view when he was appointed as Commissioner for Information Rivers State in 2008 was that little or nothing could come from a social critic, but Nwuke performed beyond the imagination of his critics and stood by the people by holding government accountable to the electorate for the change he had remained its advocate to come.

Thomas Jefferson who lived between 1743-1826 could have had Nwuke at heart when he said that a good government is one which shall restrain men from injuring one another, shall leave them otherwise free to regulate their own pursuits of industry and improvement, and shall not take from the mouth of labor the bread that it has earned. Nwuke performed creditably well as the Rivers Information Commissioner, and also, as the Commissioner for Commerce and Industry.


This could be the reason Jim Morrison said that whoever controls the Media, controls the mind. Nwuke has shown the expression that journalism school is the reminder of the age-long bitterness between the statesman and the pressman particularly for a fresher, though open to question, they need one another to grow. But just about, they are like two comparable lines, while we're on the subject.


Coming from the family of the Nwukes, a family widely recognized for their enviable contributions to the State, in socio-political, economic, cultural, educational and other progresses, Ogbonna has continued to make the family name proud. These feats of theirs are not only recorded in Okomoko town, where he comes from, but also throughout the entire Rivers State.


Ogbonna's father, His Royal Majesty, late chief (Hon.) J.H.E Nwuke, Ogbuzo II, Onyishi Etche (1951 -1970), was an educationist parliamentarian and Works Minister and later the provincial Commissioner for Port Harcourt province. This suggests to what extend the Nwukes have helped mankind both in human and in infrastructural development in Nigeria.


It was a long period of time that the Rivers people had wanted a professional to head the Information Ministry of the State, and Ogbonna represented them well. This did not happen in other existed administrations in the State: The State was misled, information wise. Pseudo-journalists were appointed to head the Information Ministry of the State. This was why, Media, Jihad & All That, Mohamed Raisudeen, said that there is no greater power in America today than that wielded by the manipulators of public opinion; no king or pope of old ever disposed of a power approached by that of a few dozen men who control America's mass news and entertainment media.


It is noteworthy to know that Ogbonna has exemplified the relationship between the press and the politician. Ogbonna was among the first in the business of independent state tabloids to stand against the biodegradable of injustice in the state for Governor Chibuike Amaechi to succeed.


Ogbonna Nwuke published and personally edited, as Editor-In-Chief, the Port Harcourt Telegraph. This tabloid, apart from high-pitched headlines androgynous feature, the newspaper used highly interpretative cartoons to capture topical issues of the moment, which often times, obeyed the rules of the press tradition.


Ogbonna was the Chairman Rivers Independent Publishers Association when the opposition finally died under the Dr. Peter Odili years as governor – 1999-2007. It was Ogbonna and the indigenous media that stood up to the occasion, condemning government's missteps and at other times setting agenda for discourse. For that attitude, he suffered depression in the hands of the government and the privately owned indigenous tabloids were marginalized.


The ears were filled with comments that Odili marginalized the indigenous newspapers in preference for Lagos based newspapers even when the issues were typically local. This trend attested robustly to the Odili policy of “charity beginning abroad,” “not at home.”

Even as inimical gestures were exhibited against the local based newspapers, Nwuke did not waver. He stood for justice. He stood for the truth and at various times criticized activities of the government officials.


The officials saw public office as their personal booty and used the same to destroy the peace and ambiguousness of the people.


According to a saying credited to the late Dr. Nnamdi Azikiwe: It is only a mad man that can chase a man with a gun. But Nwuke stood irrevocable at the face of tyranny upon the senseless bloodletting, and state induced political bickering, that was experienced in the state then. Was his unashamed stance against the tainted government not a risk to his life and that of his family? Nwuke did not mind. He stood in relentless condemnation of the stolen of Governor Amaechi's mandate given to him freely by majority of party members at the December 9, 2006 PDP convention.


Ogbonna published publication after publication, highlighting the injustice that was meted out on Amaechi and helped to keep the public faith for an Amaechi governorship until the Supreme Court judgment of October 25 2007, ousted Sir Celestine Omehia, who held office as governor in the 2007 elections.


When this happened, Ogbonna became a political foe to the ousted governor's men, because of his belief in Amaechi and his commitment to truth and justice.

Most of Ogbonna's industrious adult-life, he has known no other profession, but journalism. His friends would say that his occasional stride into partisan politics, notwithstanding, was for the way forward of the state to embrace change.


It is on record that in the 1980's and 1990's Ogbonna along with others, notably Eriye Iyaye and Charles Ogan hit the airwaves of the state radio with highly incisive, educative and powerful commentaries grounded in sound knowledge of developmental journalism. History also had it that under his watch, as chairman of the local Convention Organizing Committee of the Nigeria Union of Journalists (NUJ), that a Rivers man, Mr. Ndagene Akwu, was elected president of the Union since its birth about 50 years ago.


His strides have made him a Television in the eyes of Witold Rybczynski, Scottish–born Canadian architect, educator. “Television tells a story in a way that requires no imagination; the picture on the screen and the sound provide all we need to know—there is nothing to fill in. Television watching should more properly be called television staring; it engages eye and ear simultaneously in a relentless and persistent way and leaves no room for daydreaming. This is what makes watching such an inferior form of leisure—not that it's passive, but that it offers so little opportunity for reflection and contemplation...”


Ogbonna Nwuke's motto is: “when dialogue takes the stage, it becomes necessary for leaders of tomorrow to raise matters that affect the society”.


His performances for change remind Rivers State of a BBC radio address – 10/16/1938 – Winston Churchill, explaining why Nazism is the enemy of democracy said: “You see these dictators up on their pedestals, surrounded by the bayonets of their soldiers and the truncheons of their police. They're afraid of words and thought. ... They make frantic efforts to bar our thoughts and words. ... A state of society where men may not speak their mind -- where children denounce their parents to the police -- where a businessman or small shopkeeper ruins his competitor by telling tales about his private opinion. Such a state of society cannot long endure if it is continually in contact with the healthy outside world.”


The people of Etche/Omuma Federal Constituency have to give him their unflinching support by massively voting him into the House of Representatives in the general elections. He has always spoken out against injustice that when people talk of the freedom of writing, speaking or thinking in Nigeria, he would not be left aside.


Like Kathleen Dixon, the director of the women's studies department at Bowling Green State University in Ohio said, “We forbid any course that says we restrict free speech.”


Ogbonna believes and teaches the statement of The Clash, "Know Your Rights”: “And you have the right to free speech, as long as you're not dumb enough to actually try it.” He also believes in the words or philosophy of Thomas Jefferson to John Adams, 1791: “Truth between candid minds can never do harm.”


Ogbonna is an epitome of humility and justice. He teaches the words of Thomas Jefferson, Notes on the State of Virginia - 1787: “It is error alone which needs the support of government. Truth can stand by itself.”

He believes that, history is full of people who out of fear, or ignorance, or lust for power have destroyed knowledge of immeasurable value which truly belongs to people.


Giant Ogbonna does not like error and this could be the reason Thomas Jefferson notes on Virginia, 1782, said: “Reason and free inquiry are the only effectual agents against error... They are the natural enemies of error, and of error only... If [free enquiry] be restrained now, the present corruptions will be protected, and new ones encouraged.”


Many people had asked Ogbonna the wrong questions – that he should change his humane philosophy – but they got the wrong answer. “Justice must prevail,” is the byword for him.


Like Joseph Joubert (1754-1824), said, “The Aim of an Argument... should not be victory, but progress.” Nwuke believes in progress and could spring surprises with the words of Sir William Osler thus: “The philosophies of one age have become the absurdities of the next, and the foolishness of yesterday has become the wisdom of tomorrow.”


The change of government in Rivers State occasioned by the verdict of the Supreme Court October 25 2007 has made many Nigerians to believe in Ogbonna Nwuke so much. According to Mark Twain, Notebook 1904: “Whenever you find that you are on the side of the majority, it is time to pause and reflect.”


Ogbonna Nwuke never followed the crowed; he was always exhibiting the words of George Orwell: “If liberty means anything at all, it means the right to tell people what they do not want to hear.”


Ogbonna Nwuke is a man of principle built on morals. “The whole problem with the world is that fools and fanatics are always so certain of themselves, but wiser people so full of doubts,” said Bertrand Russell.


Odimegwu Onwumere, Poet/Author, Media/Writing Consultant and Motivator, is the Founder of Poet Against Child Abuse (PACA). He writes from Oyigbo, Rivers State. For Public Speaking invitation or Donation to his Project, contact: +2348032552855. Email: [email protected]