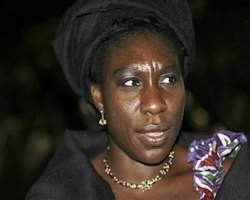 SAN FRANCISCO, Jan 27, (THEWILL) – The Peoples Democratic Party (PDP) National Headquarters today stopped Senator Iyabo Obasanjo-Bello from returning as senator on its platform with the issuance of INEC Senatorial nomination form for Ogun Central Senatorial Zone to Ms. Lola Edewor-Abiola, daughter of the winner of the June 12, 1993 presidential election, Bashorun Moshood Kashimawo Olawale (MKO) Abiola. The party refused to give recognition to the congress conducted by a faction of the party loyal to former President Olusegun Obasanjo.

The PDP today commenced the issuance of Independent National Electoral Commission (INEC) nomination forms to candidates of the party that emerged victorious in the congresses for various offices conducted some days ago nationwide.

The party is expected to forward all completed forms to the electoral commission latest Monday, January 31, 2010.

THEWILL has also gathered from the National Organizing Secretary of PDP, Prince Uche Secondus that the party has ordered a rerun in the Delta North Senate race and the Ika Federal Constituency race.

THEWILL checks revealed that former SSG, Dr Ifeanyi Okowa had comprehensively beaten Mrs. Mariam Ali, wife of former PDP National Chairman, Dr Ahmadu Ali, in a free and fair Senatorial congress in Asaba held a few days ago. But after pressures from the Presidency, a rerun was suddenly ordered a few hours ago.

The House of Representatives congress in Ika also suffered that same fate. Incumbent member of the House, Ms. Doris Uboh had been overwhelmingly defeated by new entrant, Mr. Victor Nwokolo in another free and fair contest in Agbor. A copy of the result obtained by THEWILL showed that Doris Uboh came a distant fourth with just 9 votes while Nwokolo polled 258 votes. Pressures from the First Lady, Dame Patience Jonathan however also forced the rerun.

The First Lady has vigourously led a campaign for more female representation in government.

The reruns are slated for tomorrow morning (Friday) in Asaba and Agbor respectively.

The PDP and INEC have been back and forth over the legality of the rerun congresses.

The electoral commission has maintained that primaries ought to have ended on January 15, 2011, while the PDP is of the opinion that INEC has no powers to ask it not to conduct a rerun.