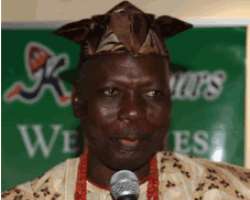 The sun set on the 13 'reign' of a prominent monarch in Oyo State , Oba Samuel Adebayo Adegbola, the Eleruwa of Eruwa, as he was deposed yesterday by a State High Court. Justice Muktar Abimbola, in a three-hour judgment that ended the 13 -year-old legal action challenging the enthronement of Adegbola, a first class traditional ruler and one of the deputy presidents of the state Council of Obas and Chiefs, declared the process of his ascendancy as illegal, ultra vires, null and void and asked him to vacate the stool immediately.

The judge also ordered the Oyo State Government, the Attorney General, Ibarapa East Local Government and chiefs of the town, one of the largest in Oyo South Senatorial district, to cease recognizing Adegbola as the Eleruwa, while directing the kingmakers to, within seven days convene a meeting to reconsider the list of nominees for the throne submitted to them by the Laribikusi ruling house, which is the rightful quarter of the two ruling households in the town, to produce the next king. The other is Akalako.

The list, he further ordered must include the names of Alhaji Rasheed Oyedepo Ajao, one of the two plaintiffs, who instituted the suit and one Joseph Oke who had approached the court to be joined in the case, as a member of the Laribikusi royal household.

Mr. Adegbola was installed the Eleruwa in 1998 by the Oyo State Government amidst protracted protests by members of the rightful ruling house after the last Eleruwa, the late Oba Bolanle Olaniyan, who is from the Akalako ruling house, passed on , on May 1, 1994. Although his nomination and selection by the kingmakers were challenged by the Laribikusi house, which argued that he was not a member of the ruling arm, but belonged to Akalako where the previous king emerged, the state government went ahead to inaugurate him, prompting the present action.

Those who challenged the authenticity of Adegbola's claims to the throne are Mr. James Olatunde Idowu and Alhaji Ajao. Joined in the suit besides Adegbola are: the Governor of Oyo State, the Attorney General, Ibarapa Local Government, Chief Jacob Adewusi, Chief Femi Atanda, Chief Idowu Okeowo, Chief E. Ojebisi and Mr. Kasali I.

The plaintiffs, represented by the lawyer, Alhaji Lasun Sanusi (SAN) sought eight reliefs in their statement of claims which were all granted by the court. Having summarized all the submissions of the counsel to both sides, Justice Abimbola resolved all the issues in favour of the plaintiffs.

Contrary to Mr. Adegbola's (deposed king) claim that he was from Ajao Alapinni family, a section of the Laribikusi ruling house, the court said the evidence before it proved otherwise as the minutes of the meetings held by the family and the record of attendance did not reflect that he attended any of such meetings or was a member.

On issue two, the court held that the meeting that produced Oba Adegbola was factional and that, the convener, one Mr. Sangotiku was not qualified to summon it under the Eleruwa Chieftaincy Declaration, Eruwa customs and provisions of the state chiefs law.

It, therefore gave recognition the list produced by the meeting convened by Pa Sanusi Alao who, it declared was the lawful person to convene such meeting as the eldest person of the ruling house. 'The exercise by the kingmakers is ultra vires, null and void. The 1st defendant is of female line' and that it contradicted the custom of the town.

I hereby hold that there is merit in the plaintiff's case and it subsists that the 1st defendant being the member of Akalako which produced the last king, it is a bastardization of the customary law of Eruwa. The approval of the 1st defendant by the 8th defendant (Oyo State Government) is hereby set aside and that it should not accord recognition to him as the Eleruwa of Eruwa,' the court ordered.

Adressing the court after the judgement, he plaintiffs' lawyer, Sanusi lauded the judge for 'a brilliant, comprehensive and incisive judgement,' which, he said had confirmed the saying that although the machinery of justice grinds slowly, it grinds surely and fine, considering how long the struggle had lasted. He thanked the judge for his patience and industry.