IN MAIDUGURI, BOYS BRIGADE TROOPS FILE OUT IN STYLE 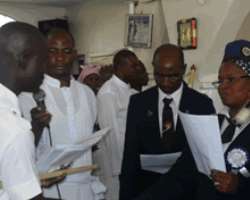 It was pomp and celebration recently in Maiduguri as the Boy's Brigade of Nigeria filed out to demonstrate their affinity and fraternity at the enrolment and installation of one of their own. The day witnessed an official inauguration of the leadership of the 38th Borno Company of the Cherubim and Seraphim Church sub-headquarters chapter of the Boy's Brigade.

As the early Sunday morning cold gave way to a warm weather, an atmosphere of conviviality was created and the otherwise serene Post Office area of Maiduguri, the location of the church and venue of the event, became electrified. It was indeed a moment of celebration for the young men and women who were clothed in their blue-white uniforms.

'It is good that this event is taking place today and as a military personnel with the Nigeria Air Force, it also reminded me of my constituency and similar programme. It is a way of instilling discipline in the youths and to also prepare some of them that may take a career in the military. I never even imagined such a thing could be taking place here because of the peculiarity of the environment but I'm impressed by the happening here,' Sergeant Ibitoye Muyiwa told Daily Sun.

Commenting on the origin of the Boy's Brigade, the newly installed captain of the company, Joshua Michael disclosed that the paramilitary group was established by a Briton in Glasgow, adding that the motive was to bring the youths together under an umbrella having being reportedly alienated and bemoaned then by the church authorities in England.

'At that time, the youths were not active in the church because they were not carried along by the church leaders in England. In fact, they were abandoned and their interest suffered greatly. It was at that point that the Boy's Brigade was established to train the youths on how to persevere even in the face of daunting challenges. It was taken out of the church and it became a non religious organisation which later metamorphosed into what it is today,' he explained.

Joshua said the enrolment ceremony was organised by the C&S Chapter of the Boy's Brigade to take new members (enrollees), promote officers to the next rank and decorate the newly appointed captain of the 38th company, noting that it was a day every brigade member was looking forward to.

'I thank God for the opportunity given to me to serve the company. It has been a fulfilling experience all this while and I must be grateful to the military personnel, lawyers and other men of God in the church for the quality of their advice,' he added.

Also speaking, a member of the advisory council to the brigade, Mr.Adebayo Bello said reviving the Boy's Brigade in the church after a few years of lull has been challenging, adding that the activities of the group suddenly noise-dived following leadership problems. He said the advisory council was constituted by the church to resuscitate the group. He maintained that the brigade was capable of uniting the youth and making them responsible through various training about life. He said perseverance, tolerance, dedication, self-determination, courage and selfless service or sacrifice were some of the lessons the youths could learn from participating in the Boy's Brigade.

Earlier, in a message titled A Faithful Steward delivered by Lady Leader Tosin Afolayan, the Boy's Brigade members were urged to be good helpers to the people anywhere they found themselves.  Quoting copiously from the Bible, she said the brigade members ought to see their calling like that of the steward, adding that kindness, faithfulness and reliability should be cultivated.

Exhortation and homily over, it was time to formally instal the newly promoted captain, Joshua Michael who will lead the 38th company of the C & S church of the Boy's Brigade. Acting DO, Bode Owolabi warned that the position should not be used to advance self satisfaction, urging the captain to use his new office to promote the gospel of peace, unity love and understanding among the people.

As the symbol of authority was being handed over to the new brigade leader after his decoration jointly performed by the state chairman of the Boys Brigade Battalion Council, Matthew Manada and the brigade adviser who represented the chaplain, Mrs Maria Bada, the congregation became excited and thereafter launched into celebration to end a period of uncertainty which has pervaded the Boy's Brigade group of the church. An impressive march pass was also demonstrated by the brigade.