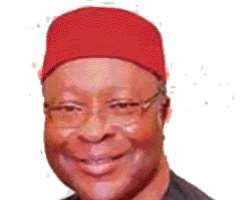 The Enugu airport which was renamed Akanu Ibiam Airport by the Chief Olusegun Obasanjo administration was built by the colonial masters. In those days the colonialists had established three aerodromes in Enugu, Calabar and Port Harcourt for easy movement of their administrators.

Thus the Enugu airport started as a colonial aerodrome before it was commissioned a full blown airport on October 22, 1976 by the late Gen. Shehu Musa Yar'Adua.

The airport has since been operating as a domestic airport until recently when the Federal Government re-designated it an international airport.

The airport which was closed from February 2010 to enable the firm appointed by the government begin the upgrading was formally re-opened on December 17, 2010 with President Goodluck Jonathan performing the commissioning of the upgraded runway of the airport and formally re-designated an international airport.

The upgrade and extension of its runway are part of Federal Government's airport rehabilitation programme designed to improve the state of infrastructure in the nation's 21 airports.

The Akanu Ibiam airport project is being executed in two phases; the first phase being the extension of the runway length from 2,400 metres to 3,000 metres and the width from 45 metres to 60 to enable large aircraft such as Boeing 747 use it.

The first phase was what President Jonathan commissioned last December while the second phase which is ongoing involves the construction of a new apron and taxiway and the upgrade of the Airfield Lighting System to Category 11.

A visit by Daily Sun to the airport showed that though it has resumed operation (domestic) many of the facilities are yet to be put in place for it to truly get the new international status.

Even the upgraded runway is yet to be provided with lights, which informed its present use only in the day.

Thus, many of the airlines have not returned to the airport as Daily Sun checks revealed that only Arik Airline and Air Nigeria currently ply the airport route for now.

However, the contractor handling the apron and terminal job was seen on site even as the airport authorities believe that by the middle of this year most of the construction works would be ready.

The Chairman, Senate Committee on Aviation, Elder Anyim Udeh, who led other members of his committee a week before the re-opening of the airport to ascertain the extent of work in the place expressed satisfaction with the level of work done by the contractors.

He revealed that the expansion of the airport shoulders had gulped N4.1 billion while it was expected that another N10.2 billion would be put into it to reach the stipulated international standard.

The senators who came on the inspection were optimistic that with the tempo of work going on in the place in December 2011 the airport would have been ready for full international operations.

'From what they have told us the most important thing is the runway, which has now met international status, and our belief is that by next year December (2011), the next pilgrims from the Southeast will take off from here,' Senator Udeh said.

He noted that pilgrims from the region still go to Port Harcourt, Lagos or Abuja, to travel out, assuring that pilgrims going to Israel this year would take off from the airport.

'As long as we have the right length of runway, these things can happen while other issues like terminal will take off. I have been to Minna airport, Katsina airport and Adamawa, the runways are well enough to take international flights even though they do not have very sophisticated terminals, the most important thing is that a plane can land, have enough length to taxi and stop. These things will come gradually, if we had started this thing five, 10 years ago by now we would have finished. We are happy that in our own time we have taken off,' he said.

The visiting senators from the Southeast revealed that they had a mutual understanding with the late President Musa Yar'Adua as far back as 2007 for the airport to be upgraded to international standard, but that was not approved until he died.

They were, therefore, grateful to President Goodluck Jonathan who kept to the late Yar' Adua promise and personally came to commission and re-designate it international airport in December.

But with the resumption of flights at the airport, many air travellers are confused about the true status of the airport.

Dr. Mbadiwe Okezie from Imo State who arrived at the Akanu Ibiam International airport from Abuja described the re-opening of the airport as a very big relief.

Happy that the airport had resumed day flight, he said: 'It has saved travellers the stress of going to Owerri; it has been hectic, it has not been easy shuttling from Enugu to Owerri just to book a flight to Abuja or Lagos and then arriving at Owerri and having to find your way back to Enugu. So, re-opening of the airport, especially at this time of the year is a very big relief to all air transport users.'

On the new status of the airport as an international airport, Okezie said: 'In terms of infrastructure I did not really notice any remarkable change, but the runway is better; it is better than what we had before now; it is broader and then longer; so that's about what has changed, but in terms of the infrastructure within the airport premises I did not notice any significant change.'

Another traveller, Mr Victor Omeniru who had just arrived from the United Kingdom for Christmas said he was disappointed with what he saw at the airport.

Hear him: 'I was a bit disappointed with what I saw; I know the runway, fine; but other facilities like the customer service places, nothing has been done to it; so I thought that they would have done more than this. When you consider the customer service for an international airport then this is a joke basically; it's a joke.

'I know we love using big words here, but to call this an international airport it's being a little bit an exaggeration. So, I think the government should do more if they want to sincerely upgrade the airport and let it measure up to the name; they should do more work; I mean it wouldn't cost much; it doesn't need to be a sky-rise building like the ones we see in England and many other places, but just to retouch the place and do it properly.'

But Dr. G.C Duru thinks differently as he said that the condition of the airport is not bad for a beginning.

'For a beginning, it's not too bad and having in mind that we never had it before and now we are having it is something to glorify God. But I have not been here at night to see the security lighting system; that is what is more important, but all the same I believe they are doing a good job. I don't think they have handed over, because it's not yet finished, but looking at it…have you been to Abuja, even the international airport there is not as big as this, so it's something we have to glorify God for that this region is getting something.

'I will thus urge the Federal Government not to relent or go back on their promise to give us a befitting airport; I am an Igbo man and as such I want the best for this place; so far, it's fine, it's okay, let the job continue,' he said.

He noted that while the airport was shut down it created a lot of inconveniences for travellers, adding, 'but good things don't come easy; everything that is good don't come that easy, it is always difficult, it's easy to destroy than to build; so, we are now building and it's going to take some time, so we must exercise patience. We are not in haste; we are Igbo people we are not in haste; all we want is the best things of life to come to our zone and it will come.'

Explaining the real situation of things at the airport, the Head of Public Affairs, Mr. Atasie Nwanganga noted that although the airport has been designated an international airport; it is at the moment operating only domestic flights.

He said that this is so because the basic facilities required for international flight are not yet in place.

His words: 'The work is being done in phases and as soon as the job is completed we shall commence international flights.'

'The process has just begun and gradually the international status is coming on board gradually,' he assured.

He praised the effort of the government and the contractors, pointing out that the runway project was one of the fastest to be completed in 10 months.