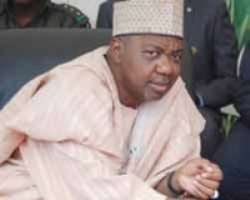 NTP, NBA fault voters' registration
VICE President Sambo Namadi yesterday assured Nigerians that the 2011 general elections in the country would rank among the best conducted in the world in recent times, saying that there would definitely be improvement in the registration of voters.

But the National Transformation Party (NTP) and the Nigeria Bar Association (NBA), Abuja branch, have condemned the voters' registration.

Sambo, who flew into Kaduna to participate in the voters' registration alongside his wife, Hajiya Amina, at Ribadu Crescent Unit, Ungwar Rimi, said that the Federal Government would live by its words to conduct free, fair and credible polls, which would be the envy of the international community in April, this year.

He said: 'I came to Kaduna this afternoon to do my civic duty of registering for the oncoming 2011 elections and I am also pleased that the process took less than four minutes and therefore the processes have improved.'

'I have been reliably informed that the software for fingerprints has been replaced with a faster one and the corps members doing the exercise are now fully familiar with the system and it is going very fast. I want to seize this opportunity to invite all eligible Nigerians who are above 18 years old to, as a matter of responsibility and urgency make sure that they register.'

Sambo further stressed: 'I want to assure Nigerians again that Mr. President, President Goodluck Ebele Jonathan, is very serious in ensuring that the 2011 election shall be one man, one vote. It will be a transparent election and it will be one of the best elections in the world Insha Allah.'

The NTP expressed fear over the ability of the Independent National Electoral Commission (INEC) to conduct credible elections in the country. The party also expressed doubt about the integrity of the commission chairman, Prof. Attaihiru Jega.

At a press conference held in Lagos yesterday, the national chairman of the party, Mr. Emmanuel Mok, said evidence before Nigerians and the party from the two critical and important activities so far conducted by INEC had shown that it had not put its acts together to be able to conduct, monitor and ensure that the 2011 April general election are credible.

According to Mok, 'the Delta State governorship re-run election and the voters' registration exercise going on nationwide are good to assess the ability of INEC.'

He noted that the voters' registration had really exposed the shortcomings of INEC.

'Our fear from the on-going voters' registration is that voting materials may not arrive on time at the polling stations and most importantly the voting machines, their cables, batteries, printers, registers and others will not be effective during the April polls. We cannot afford INEC not to get it right this time,' he said.

The NBA yesterday decried the hiccups witnessed in the voters' registration nationwide, saying that it was one project that must succeed if the country is to consolidate its effort at evolving a truly democratic era.

The Bar also warned against growing calls by government to extend the time for the voters' registration, saying any exercise beyond this month would be in breach of the Electoral Act regulating it.

Meanwhile, the Chief Judge of the Federal Capital Territory (FCT), Justice Lawal Gunmi, yesterday also lamented the quality of lawyers and legal practice, saying there was an increasing dearth of intelligence and good character at the Bar.

The Bar pointed out that a properly documented voters' register was crucial to the yearning of Nigerians for a free, fair and credible election and therefore declared that the Independent National Electoral Commission cannot afford to betray the nation in its registration of voters.

Speaking after the newly elected executive committee of the branch was inaugurated by the Chief Judge of the FCT, the new chairman, Mazi Afam Osuigwe, who expressed the concerns of the Bar over the lapses noticed at the various voters' registration centres, said the exercise was a sad evidence of the nation's failure to plan ahead of time.