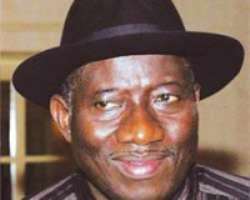 At separate fora in Lagos and Abuja, the two leaders pledged that all eligible Nigerians would be registered before the expiration of the two-week exercise, which entered its fifth day yesterday. Jonathan, who responded to fears expressed over the scheme by some Nigerians during meetings with them in Lagos on Tuesday, said: 'All eligible Nigerians will be registered before the end of the exercise. The various challenges being experienced now are being tackled by officials of the Independent National Electoral Commission.'

Jega toed this path yesterday in Abuja when he disclosed that steps had been taken to address the complaints raised by Nigerians over the voter enumeration.

In spite of these assurances, some ugly incidents occurred in some states as gunmen attempted to snatch some Direct Data Capturing Machines (DDCMs) in Ebonyi and Edo states, where armed youths were arrested for attempting to disrupt the exercise.

Amid these developments, the President of the Christian Association of Nigeria (CAN), Pastor Ayo Oritsejafor, has appealed to Nigerians to be patient with INEC in the face of initial hiccups that trailed the scheme across the federation.

He said the calls for an extension of the exercise were premature and urged the electorate to see the initial lapses as normal challenges associated with such novel processes.

President Jonathan assured Niger Delta residents in Lagos, Arewa Solution 2011, and Igbo leaders resident in the state, who were on hand to congratulate him over his success at the Peoples Democratic Party (PDP) presidential primary that all eligible Nigerians of voting age would be registered by INEC.

He advised them to ensure that they are registered so that they can vote in the forthcoming polls, adding that 'there will be no manipulations and only votes cast in the elections will count.'

The President appealed to community leaders to mobilise their people to register in order to choose their leaders in the forthcoming national elections.

Jega, who registered at his Federal Housing Authority (FHA), Maitama, Abuja polling unit with his wife and two daughters, said there have been reports of improvement in the exercise as residents of the Federal Capital Territory (FCT) speak of better work by the ad-hoc officials than the past four days.

But the call for the extension of the registration period still dominated requests by FCT residents yesterday. However, the Press Secretary to the INEC boss, Mr. Kayode Idowu said it was too early to speak on the issue.

Jega attributed the quick process of the capturing of his fingerprint to the solutions provided by the manufacturers of the machines (DDCMs), noting that in response to the outcry by Nigerians, the solutions had been deployed to all the states of the federation.

He was optimistic that soon, the slow process of registering Nigerians would be over.

Answering reporters' question in his office, Idowu said efforts should be concentrated on how to get the system working because it was too early to talk of any extension of the deadline.

Oritsejafor appealed to Nigerians not to be discouraged by the wobbly beginning of the electoral process, saying that when it becomes obvious that majority of the people have not registered, the appropriate authorities will certainly act wisely.

He said the expected free, fair and credible elections could only happen if every Nigerian of voting age, exercises patience and register for the April elections.

He, however, decried the near absence of voters' enlightenment programme by INEC, saying that the people in the rural areas were not being carried along and 'that is dangerous because politicians may capitalise on that lapse to manipulate the process in those parts of the country.'

In Ebonyi State, one person was declared missing and three others lying critically ill at the Federal Medical Centre, Abakaliki following gunshot wounds they received from gunmen who attempted to snatch DDCMs at Ndiagu Amagu, in Ikwo Local Council.

Violence broke out when rival groups in the community positioned themselves to take charge of the registration materials when suddenly a group of gunmen arrived in the scene and shot sporadically into the air to scare away the people. They headed for one of the machines but were resisted. Three of the youths were shot by the gunmen while the whereabouts of the fourth victim could not be established at the time of filing this report.

The three victims are Alobu Benedict who had a bullet that went through his back to the stomach, Uche Nwajo, and Clement Igboji.

Narrating their ordeals, Uche and Clement, who struggled to talk amidst grunts of pain, alleged that a former coordinator of Ikwo South Development Centre on arrival at the venue ordered his thugs to shoot at them.

In his reaction, the police state command Public Relations Officer, Mr. Ukie John Eluu, confirmed the incident, saying the police was investigating the matter. According to him, there were different versions of what transpired at the centre.

Eluu said three persons have been arrested in connection with the shoot-out but declined to disclose the identities of the suspects.

Scores of suspected hoodlums and thugs were yesterday arrested in Ihievbe, Owan East Local Council of Edo State as they attempted to truncate the registration exercise.

Former Senate Chief Whip, Roland Owie urged INEC to adopt manual registration of voters alongside with the electronic process that most Nigerians are disenfranchised.

The suspected thugs were said to have come in eight buses to the area where Senator Yisa Braimoh, representing Edo North Senatorial District hails from.

Speaking to journalists yesterday in Benin City on the exercise, Owie said the electronic process was failing, adding that five days into the exercise, only three wards in his Uhunmwonde Local Council had received registration materials, and the machines are malfunctioning.