2011 PRESIDENCY: WHAT IF THE CONTEST BEGINS WITH A WRESTLING MATCH BETWEEN JONATHAN AND RIBADU IN PUBLIC, THEN THE DEBATES? 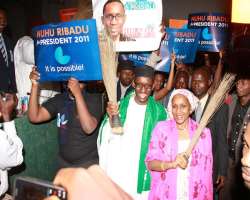 In recent times the life blood of politics and elections in Nigeria has become openly physical, partly because of the unusual power struggle between politicians. These types of fights amongst political aspirants or leaders in the country will be surpassed by a new one as we are about to see now and this recommended fight will be between Jonathan and Ribadu. Jonathan and Ribadu will be drawn to a wrestle under a written consent, and the fight must be fully expected by Nigerians both at home and in the Diaspora.

We all know the grim nature of Nigerian problems at this time, as well as the struggles that continue to confront the people. In particular, we now know a system of free and fair election is a major problem in Nigeria, as Attahiru Jega and INEC recently experienced with the text case of Delta’s recent gubernatorial election, however, that should not stop us from trying to make it better.

We will all admit that in a complex society like Nigeria with its numerous social, political, institutional and infrastructural problems, there is need for a leader who is both physically and intellectually strong. Brothers and Sisters, what better way to show one’s physical strength than through a show of manliness and a feat of strength which could only come through a flesh and blood type of fight such as an all-out wrestling between J and R. The wrestling match should be a onetime fight in a major public ground, and while the nation expects both a winner and a loser out of the fight, the goal of the mêlée should not be about the destruction or disqualification of an opponent as they must both be ready for the series of intellectual debates that will follow.

Again, they should fight first and let’s see who will recover fully as that will be one indication of a show of persistence, and vigor which will be required as they vie for the control of the presidency. It takes energy to fully face the tide of debates, especially when the debates must shift across the federal capital, different states, and rural areas. No excuses, as the people across the country deserve such openness. In some of these places, there will be rough roads, heat from generators, poor air conditioning, damaged areas and other bad positions which are not unusual to average Nigerians.

Both J and R must be psychologically ready to fight through these commonplace hassles and hazards as they set out to debate for the presidency. Through this all-new way of rolling out national debate in front of the people, everyone can quickly ascertain which one of these frontrunners has the energy to bear the desperation and pressure carried by many in the country on a daily basis. During the debates, we will witness the intellectual rigor of J and R, and determine who is the intellectual lightweight or intellectual heavyweight?

Unlike anything else, there will be no room for a draw in the fight as the citizens will be looking for a clear winner or loser in the daylight brawl as well as debates. We know they will argue about economic, education, healthcare, security and other institutional reforms, but first we must determine who among them has the fighting spirit and competitive power to handle an irregular nation like Nigeria. The nation is in need for a non-violent and institutional revolution, and one of them must unleash the physical and intellectual energies that will be needed to clean the country, and guide the hopes and needs of the people. The problems of challenging the results of the fight, and any of the pre-April debates will be unnecessary as everything will be in the public sphere followed by instant judgment.

The results will be more credible and transparent unlike the actual April election which as will all know could be mired in fraud. Nigerians live in an extraordinary time, and it is now up to Attahiru Jega to set the date for the all-out wrestle and the subsequent debates. But to ensure the democratic process, let the likes of Jonathan, Ribadu, Buhari, Shekarau, Utomi and others join in the April Presidential election with the hope that INEC will work towards ensuring a minimal atmosphere of impartiality as no election is perfect. Again, before anything else, let the apparent two popular politicians, Jonathan and Ribadu take the lead through push-downs and takedowns within a contest that is certainly more of a perfect match, then Jega can take it from that point. Best of wishes to the people.