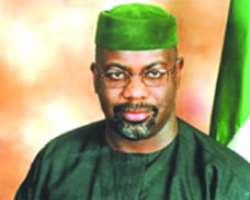 •Imoke
Jonathan may be in charge, but that is what the governors say in public. Many of them are believed to hate the prospect of a Jonathan presidency with a passion and may therefore, give last-minute counter instructions todelegates from their states.

It is even more so now that they have all secured their return tickets. Akpabio remains the sure banker here. Barring last minute political maneuvering, President Goodluck Jonathan, a South South homeboy is sure to rake in the chunk of votes from the zone at the party's primaries.

In all the six States in the geo-political zone, the unwritten signpost is that any other presidential aspirant should shop elsewhere for votes.

This is chiefly because of the long-held resolution of the leadership of the six states in the region to back President's Jonathan bid to retain his tenancy of Aso Villa for the next four years. Howbeit, in Cross River and Delta States, there are possibilities that former Vice President, Alhaji Atiku Abubakar, could poach some votes, no, thanks to intra-party squabbles. In Rivers State, party and government sources have assured that there is no changing the long-held resolve to deliver the entire votes of its delegates to the President, who incidentally is, 'a worthy son-in-law' having married from Okirika community in the state.

It was gathered that the delegates have been briefed and subtly warned to resist any temptation to look beyond the President at voting time, 'no matter the inducement'. This is despite the closeness of the Head of Alhaji Atiku Abubakar's Campaign in the State, Prince Tonye Princewill, to Governor Chibuike Amaechi. As a matter of fact, a remark by Deputy Governor, Tele Ikuru when the former Vice President came calling about a week ago, at the PDP state secretariat, that, 'having heard these good things, we will join you to make good things happen', had set tongues wagging.

But Mr. Blessing Wikina, Chief Press Secretary to Governor Amaechi, punctured any balloon of hope for the Atiku camp, describing Ikuru's statement as, 'a matter of protocol reception' accorded any visiting former leader.

'For the purpose of electoral civility, there is no way they would not have given him a warm reception. The same reception would have been accorded IBB, Obasanjo and others'. Mr. Wikina said the resolve of the South South zone including Rivers State to sink or float with President Jonathan has not changed.

'We will be with Jonathan from beginning till the end'. On how the government and party leadership intend to ensure that no delegate plays the spoiler at the primary, Mr. Wikina said the state's strategy remained a secret. 'Generals who are going for a battle don't announce their tactics. There is no way the state will announce whatever strategy it has to ensure that there is no black leg among its delegates'. Our correspondent in Edo State, Tony Osauzo reports also that President Jonathan is sure to clinch the state's votes at the primaries.

From all indications, his opponents in the race for the ruling party's presidential flag pose no serious challenge in the state. Besides, top and influential party stalwarts in the state, such as Chief Tony Anenih, Dr Samuel Ogbemudia and Admiral Mike Akhigbe are solidly behind the President. It is within convenient recall that while commissioning the Jonathan/Sambo Campaign Office in the state capital, Benin on December 6, last year, Chief Anenih declared that, 'there is no vacancy in Aso Rock' despite 'Adamu Ciroma consensus candidate'. That view remains current and is likely to determine where the delegates' votes will go.

In Bayelsa, President Jonathan's home-state, Femi Folaranmi reports that Governor Timipre Sylva would do anything to ensure that the President rakes in all the votes from the state and even beyond to emerge as the party's presidential flagbearer. The governor had declared shortly after clinching the party's ticket at Sunday's primaries that he was relocating to Abuja to ensure the President's victory.

Sources said that to prevent any infiltration of the state's delegates, adequate arrangements have been made to camp them in one hotel with strict instructions to disallow visitors. The governor was said to have gone further to call for 'spiritual support' for all the state's delegates so that nothing untoward occurs to stop them from voting for the President. Consequently, former Vice President, Alhaji Atiku Abubakar may not get a vote from the state where his camp had expected to exploit the division that had existed within the State chapter of the party until not too long ago.

Party members in the state who have been clogs in the wheels of Jonathan's race to victory including those who lost out in the recent primaries have defected to other political parties. The obvious implication is that neither Atiku nor Mrs Sarah Jubril will get a vote from the state. Governor Liyel Imoke of Cross River State doubles as the South South Co-ordinator of Goodluck/Sambo Presidential Organisation and would want to ensure a one-way win-win for the President at the primary.

The governor's style of politics, reports Correspondent, Judex Okoro, has since weakened hitherto political big-wigs in the state who would have been dissenting voices. Already, the sing-song in the state is 'Jonathan-Sambo odudu' meaning 'Jonathan-Sambo, power and carry-go'. The combined roles of such pro-Jonathan groups as the Goodluck Support Group (GSG), the South South Democratic Voice, Jonathan Consolidation 2011 and the Cross River Elders Forum have helped to collapse any major opposition.

However, Daily Sun investigation revealed that Atiku could spring surprises and alter the calculations of the President's camp. There were strong indications that during his recent visit to the state, the former Vice President successfully made in-road into the state through former Governor Donald Duke and some National Assembly members who are discreetly working for him. Some incumbent state and federal lawmakers were said to have entered into agreement to work for Atiku in return for some juicy appointments.

Sources close to Atiku's camp in Calabar confided in the Daily Sun that the former Vice-President's strategic team led by Duke penetrated some delegates in the state and worked on them to sway to Atiku's side. Atiku was said to have met the delegates one-on-one at the Presidential Lodge and Duke's residence when he promised handsome rewards if he scaled through the primary. Also, some of the incumbent legislators who lost their re-election bids in the recent PDP primaries have vowed to have their own pound of flesh on Governor Imoke by voting against President Jonathan. The aggrieved parliamentarians were piqued that the governor allegedly used and dumped them and still expect them to play the good lads.

One of them who would not want his name in print confirmed that the Atiku camp has been dangling some carrots which could sway delegates. From Delta State, Buchi Enyinnaya reports that earlier fears of possible loss of votes by President Jonathan to other aspirants melted with the recent re-election of Governor Emmanuel Uduaghan.

A lingering crisis in the State PDP had caused the emergence of two factions led by elder statesman, Chief Edwin Clark and the governor respectively.

During the crisis, the popular calculation was that Governor Uduaghan, a first cousin of President Jonathan's political foe and former Delta State governor, Chief James Ibori, preferred any other candidate to the President.

Given the President's significant role in ensuring the governor's return and the reconciliation of the two PDP factions, it is likely that the majority of the State's delegates would vote for the President. could pinch a few votes from the State.

From Governor Godswill Akpabio's Akwa Ibom State, Joe Effiong reports that President Goodluck Jonathan could go to sleep assured that virtually all the votes from the State are already for him. The chance of any other presidential aspirant on the PDP platform in the state evaporated on January 9 , last year, at Uyo township stadium when the governor dazed the mock intra-party opponents to clinch almost 100 percent of votes to emerge the party's gubernatorial standard bearer.

That exercise was significant because Governor Akpabio is an unrepentant Goodluck Jonathan fanatic and that total victory provides more than- adequate guarantee of Jonathan's victory in the state. Up till now, there is no evidence of Alhaji Atiku Abubakar's political presence in the state apart from a giant campaign poster pasted on a building along Aka Road in the state capital. His former political associates in Action congress of Nigeria (ACN) regard him as a political pariah whom nobody should.

With Aihaji Atiku literarily reduced to a single poster, and Mrs Sarah Jubril not having even a poster in the state, the coast is definitely clear for President Jonathan to sweep the votes from the state. It is within comfortable permutation that the president would win at least 95 percent of the state's votes at the primaries. After all, the state was the first to move a motion formally asking President Jonathan to contest the presidential election during his official visit in July, last year.