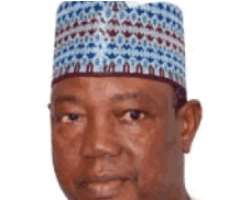 • Doma
For a first time visitor to Nasarawa State, one cannot but be held spell-bond by the tranquility and ambience of the state capital, Lafia. Aside the beautiful landscape, major highways were also neat and well maintained.

It is also amazing that the state has remained peaceful unlike most of its neigbouring states where violence and insecurity has been the other of the day.

While attributing the success story of the state to the dynamism of Governor Aliyu Akwa Doma, a man who has been described as a quiet achiever. For this humbled term technocrat and cultural exponent, his success can be attributed to a 13-point agenda he out on his assumption of office.

It is a good thing that his achievements played a major role in his being nominated by his party, the Peoples Democratic Party (PDP) for the April governorship election in the state. Dubbed by many as the roadmap to Nasarawa State's greatness, the agenda has been the central cardinal objectives for Doma and his team. He also put in place a policy thrust that would transform the socio-economic lives of the citizens of the state.

The agenda primarily revolved around security, agriculture education, health urban development, rural development, industrial empowerment, dynamic civil service, housing, tourism and cultural re-awakening. Doma's giant strides have not gone unnoticed. He was honoured and recognized both in Nigeria and overseas. He clearly stands out tall and among his peers in several aspects of governance, especially in area of promotion of culture, agricultural revolution and educational reforms.

To position Nassarawa State as a pace-setter, a 16-member Education Reform Committee was set up. Members of the committee include leading traditional rulers, some of his own personal aides, members of the teaching professional bodies, school owners, parents and other stakeholders. Doma's decision to give education a boost is already yielding dividends, as the state has been picked as one of the states to host the proposed six new federal universities. While reacting to the decision of the Federal Government to site a university in the state, Doma said it was good news which people of the state have been waiting to hear for a long time.

The governor donated the building and facilities of the state's College of Agriculture, Lafia, for use by the new university. On the cultural front, through the active support of Doma, the state contignet emerged as the overall best during the recent Abuja Carnival. The state won the award for a record third time since Doma assumed office.

Some of his other landmark achievements include laying the foundation for cultural renaissance and revival in northern Nigeria. He initiated and nurtured the South of Jos campus of University of Ibadan, which later metamorphosed into the University of Jos in 1977. In recognition of his efforts in bringing rapid growth and development to Nasarawa State, Doma was bestowed with several honours and awards. In July last year, he bagged Sardauna Leadership Award and Governor of the Year in the North Central zone of Nigeria in recognition of his selfless service to the people.

He was also honoured by late President Gnassingbe Eyadema of Togo for his outstanding performance as a technocrat when he was in the civil service. Former president olusegun Obasanjo honoured him with the National Award of officer of The Order of Nigeria in 2002. In far away, London, Doma was conferred with the Most Outstanding Entrepreneurial Achevement Award in 2009.

According to the organizers, Doma's exceptional entrepreneurial feat has become a prototype for entrepreneurial excellence for many promising and established entres of African background to drive themselves to the pinnacle of success in their various business.