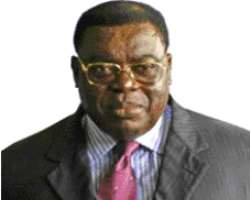 •Arumemi-Ikhide
Despite having navigated the turbulent waters of Nigeria's aviation sector and came out with the biggest airline that Nigerians can be proud of, Sir Joseph Arumemi-Ikhide,the Executive Chairman of Arik Air, is worried and sad rather than being contented. One of his greatest worries at the moment is that the aviation industry, which should have soared to greater height, is still crawling and groping in darkness.

In this interview, he poured out his heart on the goings-on in the sector. Excerpts:

Safety
I read some papers and someone spoke about the Boko Haram sect, saying that our airports are not safe. I believe the trend we are observing will do no good to the whole effort that everybody is putting in aviation. You have to look at its national and international implications. And taking into consideration that we have just gotten Cat 1, which a lot of people laboured for, Arik in particular. We spent a lot of money cooperating with the NCAA Director General and all the staff worked very hard. A

lso, the Ministry of Aviation, NCAT, and others worked well to see us achieve it. Now, when people start saying this type of thing, it is very unfair and it is a disservice to this country. Nobody can walk into the airport as reported in the paper and cause havoc. Our airports are not as porous as that. There is stringent security and for us to get Category One, these are all the issues that were addressed by the Federal Aviation Administration of the United States and other agencies that came.

Also, that foreigners sell us poor equipment we can afford is also not true. Some also alleged that Arik Air buying airplanes meant for some other airlines overseas is also falsehood. These so-called experts are not informed at all. What Arik buys is airlines' slots but the specification is completely ours. In fact, the specification must be certified by the NCAA before we take delivery of them. All these comments end up misinforming people. Some even ask, who is supporting Arik? I would like to say that there has been a lot of discussion in the newspaper about Arik aircraft.

Let me simply say that there is a lot of misconception about how aircraft are purchased. I am talking in respect to new aircraft. For example, Arik has placed orders for seven units of the B787-900, and of course we have orders for three units of the Airbus A380 with Airbus and we have some orders with Boeing for the B737-800s. And we have various dates of delivery based upon our business plan. When we started, we had our business plan, and we are looking at the number of aircraft we would buy and those that need to be redesigned from year to year.

I would like you to see the manuals of some of this aircraft, you will see that they were actually specifically made for Arik Air. And if you check Boeing website, you see that this aircraft right from its inception it was specified by Arik. And of course we had competent consultants who worked with us during the specification, having got clearance from NCAA. Because there are certain items that NCAA insisted to be in all Nigerian registered aircraft and even some features that we have in the aircraft are in line with what NCAA wants.

Consolidation
When the 9/11, 2001 terrorist attack occured, the American government pumped money into domestic airlines, not minding the fact that they were private entities. Why can't they pump money on Arik, Bellview Airlines? They simply have to protect their own first. Like I said, the Managing Director of Bellview, Mr. Kayode Odukoya , is the Richard Branson of Nigeria. You can imagine the enormous resources that was directed to the airline and it still had problem. Arik owns so much now, it's becoming a national carrier through government support. What happens in two years time?

There is an informal discussion between the active existing airlines like Aero, Air Nigeria, IRS, Chanchangi, First Nation and Arik. We want to get together , have a chat and then know the way forward because there is need for us to come together and look at the challenges of the industry as a group. If it metamorphoses into an association as a group, so be it.

The car that rammed onto Arik plane in Calabar
You will recall that sometime in 2010, our aircraft was seriously damaged in Calabar when a taxi rammed into the engine of the belly of one of our new aircraft that is less than a year old at Magaret Ekpo International Airport. After necessary investigations, this aircraft was repaired temporarily and ferried to Europe for exigency repairs. Perhaps we all should remember that the aircraft had passengers on board, ready for take-off to Abuja when a taxi ran into it.

But for the advance specification of the aircraft, which has double tank, there could have been some explosion and all the passengers would have died. When this aircraft was flown abroad, the integrity of the systems had to be checked and restored and a lot of exigency repairs were carried out which cost about N1.9 billion. This money had to be paid to the MRO (Maintenance Repair Organisation) centre, before the aircraft was released after about 60 days out of the country. Suffice it to say that we wrote FAAN and the Ministry of Aviation.

We wrote several letters before the aircraft was ferried to Europe and after the aircraft returned to the country and up till now there has been no response  from both FAAN  and the Ministry of Aviation. We must put on record that some top officials of FAAN made phone calls and expressed their sympathy about the incident, and that is where it all ended. You all watched on the television when Captain Iyal, Senior Special Assistant to the President, said that a commission of enquiry was set up, we have asked for the report, no response. Because Arik is not a charity organisation, we offset the bills and then said whatever our bills and their bills are, we will continue to use their facilities until we exhaust whatever we used to repair the aircraft.

Of course FAAN has used unorthodox methods in trying to get their money and claiming that the issue in Calabar had nothing to do with FAAN and that Arik should approach the Air Force. Suffice it to say that our insurers came to Calabar a few days after the incident and met the situation unattended to, the security situation both at the gate and everything when the accident occurred was still the same way which shows that there is no seriousness. Of course, they refused to be involved in any compensation, instead our insurance premium was increased.

However, as a result of the last incident in Abuja and now that a committee has been set up between Arik and FAAN to be chaired by a committee set up by the Minister of Aviation to sort this issue out. I think in early part of this New Year, there will be a meeting between FAAN officials, Arik and Ministry officials to sort this issue out because as far as Arik is concerned Arik is not owing FAAN. I do not think that everybody should deny that, if somebody takes a hammer and hits his car and expect insurance to pay for negligence and that, no insurance is involved to make such payment.

Challenges
Another issue we would like to discuss which many of you have highlighted and members of the public would be interested in is the issue of the delays by some airlines and Arik has been accused of causing delays. Suffice it to say that all airlines would like to have many flights as possible because the aeroplane is not only designed to fly in the air, but you want to recoup your money quickly. But we are being constrained by the infrastructure in Nigeria. The first one is the fuel, which is becoming very problematic now. It is not the issue of owing fuel marketers now.

I am sure most of them will tell you it has nothing to do with airlines owing them. I think the issue has to do with the question of funding for the marketers to import the product. The banks cannot give you loans, most of them had to make arrangement on how to import their fuel, unlike previously when the banks do give them some credit facilities. Another major problem which we are facing, and I have said this to the NCAA and the Aviation Minister and most of the marketers is having the equipment. The fuel trucks are few for the number of planes. Moreso, they are very old.

I have held several discussions with a few of them and they promised that before December (2010), they would buy more fuel trucks. But unfortunately, for one reason or another they have not been able to fulfil that promise. Sometimes Arik has six aircraft on ground and you have only two fuel trucks, most times one. And in some cases the fuel trucks go bad or (like) in Abuja, the road to the fuel depot is bad. That causes delay or hold up, that has nothing to do with Arik.

Those are some of the challenges we face. Another issue you will find out is the question of the screening points. In Lagos at GAT (General Aviation Terminal), there is only one screening machine, so early in the morning about a thousand people want to go through it, it s not possible. The same thing in Abuja international airport terminal, we only have one screening machine functioning at a time. And some time both Air Nigeria and ourselves are boarding and this cause a lot of delays because Arik has more of these passengers. Nevertheless, in spite of all these, we still have the problem of baggage handling. I am aware that the new SAHCOL manager is putting all the effort in purchasing more equipment.

Way out
Our population is growing with a number of people travelling and of course we need a proper airport terminal both at Abuja and Lagos. Ordinarily in other parts of the world, major airlines are allowed to have their own terminals which they build and manage. Arik has applied and offered to build this terminal at its own cost and, of course , hand it over to FAAN after 12 years.  Unfortunately, we have not got any response from the appropriate authorities.

Our international airports, Murtala Muhammed Airport needs to be upgraded and again Arik has offered that giving a space, it can build its own international terminal in view of the fact that the wide body aircraft like the A380, the Dreamliner, 747-800 will be in its fleet.  We have made every effort to convince the government to allow us to handle those projects. Suffice it to say that Arik will get experts who are ready to work with Arik and provide funding.

We wish to point out here that this terminal should be specifically for Arik and Arik alone. However we are ready to extend it to another local Nigerian airlines if they so desire to use it. We are not set out to start competing with other concessionaires. We only want to make air travel to be seamless, to be comfortable and enjoyable. Just as we have new planes as you can see in other parts of the world, we want to get good concept of airport terminals.

And in fact airport terminals should have meeting rooms where you can fly to an airport and have your meeting, have your lunch and go back without going to the city. These are some of the concept we have in mind.