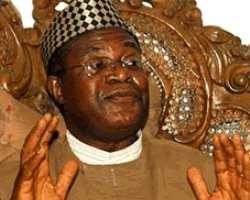 • Nwodo
There was a new twist yesterday to the crisis rocking the Peoples Democratic Party (PDP) in Enugu State as an Enugu High Court issued an interim order restraining Dr. Okwesilieze Nwodo from parading himself as the national chairman of the party while Governor Sullivan Chime emerged winner in the party's primary election also conducted yesterday at the Okpara Square.

The governor and Nwodo had early in the week agreed at a meeting called at the instance of President Goodluck Jonathan in Abuja to share the political zones of the state, with Chime controlling Enugu East and West while Enugu North was left for Nwodo.

But surprisingly, yesterday, the Enugu High Court presided over by Justice Reuben Onuorah issued an interim order restraining Nwodo from parading himself as the national chairman, particularly as it concerned the ongoing primaries of the party. The court order followed a motion filed last year by one Collins Amalu, a PDP member from the Ngwo Uno Ward of the state who argued that Nwodo did not re-register after he returned to the party and thus was not given a valid membership card upon his re-entry into the party.

Justice Onuorah noted that Amalu had in Suit No. E\449\2010 made an oral application through his counsel, Mrs. Justina A. Offia (SAN) praying the court for an order of interim injunction aimed at restraining the defendant (Nwodo) from holding himself out as a member of the PDP or an officer of the party to wit, national chairman of the party.

Amalu, he said, was also seeking the court to stop Nwodo from 'exercising the rights, powers and or functions of a member and officer of the party and or enjoying any privilege as a member and or officer of the party, pending the hearing and determination of the motion on notice for interlocutory injunction.' Justice Onuorah, after hearing the submissions of Chief Offia, counsel for the plaintiff and Prof. Okafor, counsel for the defendant, said:

'An interim order is hereby therefore made restraining the defendant (Nwodo) from exercising the rights, powers and or functions or enjoying the privileges attached to the office of the chairman of the Peoples' Democratic Party pending the determination of the motion on notice for interlocutory injunction.'

The judge, however, adjourned hearing on the substantive case till January 31. On the party gubernatorial primaries, Governor Chime polled 811 votes to beat three other aspirants in the contest: Mr. Okey Ezea, two; Val Nnaedozie, one; and Anayo Onwuegbu, two.

There were a total of 990 delegates in the state, but only 870 voted out of which 54 votes were voided.

Chime who was declared winner by the Chairman of the party's panel for the primaries, Alhaji Tafida Isa Mafindi, commended the panel, saying it did a great job. The governor also thanked the delegates for voting for him, saying the PDP in the state had spoken.

He said his victory at the primaries was the beginning of the journey even as he assured the people that victory would come their way in the April governorship election.