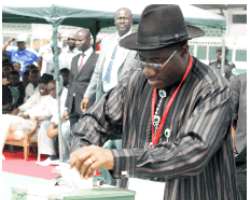 While Jang, a sole contestant polled 778 votes to emerge, Sylva garnered 420 out of the 481 votes to defeat eleven other aspirants in the primary, which had President Goodluck Jonathan in attendance.

Gabriel Suswan defeated Terver Kakih to emerge the standard bearer in Benue State. He scored 297 votes as against his opponent's six who did not get any vote from zone C (Idomaland).

In Rivers State, the incumbent Governor Rotimi Amaechi clinched the ticket polling 1,139 out of the 1,143 votes cast. Three votes were voided.

In Akwa Ibom State, Governor Godswill Akpabio dusted his two opponents, Frank Okon and Imoh who were disallowed from the contest. Akpabio polled 1261 out of the accredited 1287 delegates votes.

In Imo, Ohakim scored 1089 out of 1143 votes to beat Udeagu with 27 votes and Nwajiuba who polled three votes.

The Dr. Danlami Rukeye-led governorship panel in the state started the accreditation of delegates at about 2pm while voting stopped by 5pm.

Addressing the crowd at the Grasshoppers International Handball Stadium, Governor Ohakim said that all hands must be on deck to enable the governor to do more and deliver the democracy dividends to the people.

He said that his victory was not only a landslide but total indicating that the people have embraced democracy.

Commenting on the outcome of the governorship primary, the National Vice Chairman of the PDP SouthEast, Chief Olisa Metuh observed that the conduct of the primary was transparent and urged the PDP delegates to congratulate themselves for a peaceful election.

While addressing the party delegates earlier, Udeagu had lamented the mass exodus of the foundation members of the party, saying that he was in the race to ensure that every party member is on one page.

Jang emerged from a lone contest, which saw the delegates voting only in fulfillment of the new rule as contained in the new electoral law, which emphases that even in situation of no contest, delegate must vote to confirm the percentage of those actually in support of the candidate.

The analysis of the delegates show that Northern zone delegates were 273, while that of the Central and Southern zones were 244 and 261 respectively.

Announcing the result, the chairman Convention Committee, Mr Emmanuel Abeshi said Jang's emergence as PDP candidate has fulfilled the clause that even if a person is unopposed there must be election to authenticate his popularity.

Jang commended the efforts of all those who worked tirelessly to ensure that the party achieved a lot, especially the state chairman of the party, Dr Haruna Dabin and the former chairman, Professor Dakum Shown.

He said when his government came on board it resuscitated the old structures of the state economy and built new ones where necessary, saying if he is re-elected he would use the period to initiate new projects in fulfillment of his ten point agenda.

While Elechi of Ebonyi State with not challenger was returned by the chief returning officer, Dr. Doyin Okupe having polled 634 out of the 688 accredited delegates votes with four voided, Amaechi's scored a landslide victory leaving his lone challenger, Mrs. Denisada Ben-Fiadesima with just one vote. The primary held peacefully and without crisis.

Okupe said the peaceful outcome of the election was a reflection that democracy is thriving in the country even as Governor Elechi in his acceptance speech commended the delegates and solicited greater support to enable the party win the April general election.

He urged the people not to relent in carrying the message of good governance, accountability, probity and obedience to rule of law to the nooks and crannies of the state as that would guarantee his mandate during the general election.

However, as at press time yesterday, there was palpable tension and confusion in Enugu State.

While the primary in Lagos State was put off till today over what an official described as 'logistic challenges', Ogun State held parallel congresses and produced General Tunji Olurin (retd) and former Managing Director of the Gateway Holdings, Gboyega Nasir Isiaka. While Olurin polled 754 votes to beat three others during the primaries held at the Olusegun Obasanjo Presidential Library (OOPL) Isiaka scored 831 to beat other aspirants during the primaries at the MKO Abiola Stadium, also in Abeokuta.

The primary election attended by the 680 delegates from 193 wards unanimously adopted the House of Reps member at Olatuna Memorial Centre, along Ajase-Ipo Road, Ilorin.

The Chairman of the Electoral Panel, Chief S.O. Adedayo said the candidate emerged as the winner based on the fact that Bolarinwa was the only candidate who fulfilled the party's requirements.

Meanwhile, the governorship primary of the faction loyal to Governor Bukola Saraki was awaiting the electoral team from Abuja as at 6pm yesterday at the Adewole Base Ball Court, Ilorin.

Niger State Governor, Babangida Aliyu was the sole candidate presented by the party at the event held at the International Trade Fair ground in Minna. In his acceptance speech, he said the successful conduct of the primary showed the dynamism and resilience of the party in the state.

The governor, however, warned that the struggle has actually just begun as the PDP will contest the general elections with other political parties and so enjoined the victorious flagbearers to mobilize the electorate to vote PDP in all the coming elections. In Kaduna, Yakowa who became governor following the death of former President Umar Yar'Adua last year, defeated Sulaiman Hunkuyi, Shuabu Mikati and Hajia Mairo Habib with 904 votes.

There was tension as windscreens of several vehicles were smashed by irate youths. The police had to struggle to ward off political thugs from Murtala Mohameed Square, venue of the gubernatorial primary election.

The thugs suspected to be supporters of one of the gubernatorial aspirants had surged towards the main gate of the Murtala square, chanting slogans in Hausa language. The police had to shoot sporadically into the air to keep them off.

Scores of Police armoured vehicles, manned by a combined team of heavily armed soldiers and policemen attached to the state security outfit, 'Operation Yaki' who patrolled the area, occasionally shot into the air even as the thugs lurked around the area.

Journalists who went for the coverage of the event were subjected to several hours of screening at the gate by officers and men of the state police command and other security operatives. There was long queue of delegates whose number were put at 1,300, and they were said to have started voting at about 2 pm.

The Vice President, Namadi Sambo, Senator Ahmed Markarfi were at the voting venue.

But unconfirmed report said one of the aspirants, Hunkuyi walked out of the venue in protest.

Meanwhile, one of the aspirants, Mikati had a few hours to the election stepped down for Hunkuyi, and urged his supporters to rally round him.