In one sentence… Define marriage 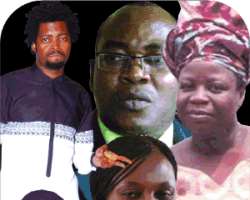 The Almighty God considered marriage so important that he talked about it right from the early chapters of the Bible. In chapter 2, verse 18 of Genesis, the first book of the bible, for instance, God said it was not right for the first man he created, Adam, to be alone. So God made a compatible mate for him.

Upon seeing the woman for the first time, Adam was so excited that he became a poet, pouring out his soul in these words: 'This is the bone of my bones and the flesh of my flesh.'

He also named the woman, Eve. God on his part confirmed the union by saying, 'Therefore shall a man leave his father and his mother and shall cleave unto his wife.'

For generations, numerous individuals have attempted to describe marriage based on their experience and understanding of this unique relationship between a man and a woman.

For instance, Wikipedia describes marriage as a social union or legal contract between two individuals of opposite sex, which creates kinship.

It is also an institution in which interpersonal relationships, usually intimate and sexual, are acknowledged in a variety of ways depending on the culture or subculture in which it is found.

Whatever the definitions, there are several reasons why people get married.

The reasons could be legal whereby the two partners involved see marriage as official authorization for them to satisfy each other's sexual needs without fear of either spiritual or societal punishment. For many ladies and men, being married somehow elevates them in the esteem of the public. Ladies particularly, see marriage as the legal avenue for meeting their emotional needs.

Given the intricacies of marriage, relationship counselors have always advised individuals going into marital union to recognize the importance of compatibility and understanding between the partners.

The intending partners have freely agreed to be joined together, the union is then formalized through a wedding ceremony, whether in church, mosque, court or traditional African or Asian setting. The pronouncement of the union immediately places certain obligations on the partners to protect and raise the children that would result from the marriage.

In the African setting, this obligation extends to the care of members of nthe extended family.

For generations, the wedding band worn on the third finger, after the thumb, has been the symbol indicating that the person wearing it is married. Unlike the plain rings worn in the past, wedding bands have in themselves become fashion statements in the way they are designed and in some cases encrusted with diamond.

In the near past, the wedding ring was so honoured that even the most lecherous of men kept a respectable distance from a woman wearing it. Women also saw a man with a wedding ring as a 'no go area' that should be avoided. But all that has changed as a result of moral decadence in the society.

However, it must be acknowledged that the majority of properly wedded and happily married women still cherish their wedding rings and see it as a physical line of defence against the unwelcome 'expressions of interest' from 'ungentlemanly gentlemen' who erroneously belief that any woman is fair game that can be pursued.

Even ladies who believe that a man's wedding ring should not dissuade them from 'chasing' him are well advised to watch out for a certain Kate Halim, who took the fantastic step of posting on Facebook, a bold picture of herself and her husband 'glued' in a French Kiss, thereby sending a global digital flashing red light that said, 'Dangerous Zone, Keep Off' to all women, married or unmarried, just to protect her husband and marriage from all Satanic scud missiles of roving female eyes. Like the bible says, 'to each according to his faith,' Heaven must have agreed with her and promptly posted special angels on guard around her marriage.

Marriage offers unquantifiable benefits though it comes with a lot of challenges. For those who see sex as sin outside marriage, and yet desire to righteously satisfy this need, marital union provides unlimited opportunity to attain Cloud-9 and treasure the memory.

It makes legal procreation possible, providing companionship in the process.

Through it, many achieve success and fulfillment just as the bible declares: 'He who finds a wife, has found a good thing and will obtain favour from God.' Why not, after all it was God that instituted marriage in the first place!

On the other hand, many people who are not experiencing marital bliss are quick to brand marriage as a burden; such people secretly wish they culd cast off the 'load' without repercussions.

In the effervescent style of the Sunday Sun, we asked a number of notable individuals to give us one-sentence expressions of their views on marriage. Excerpts…

FUNKE FADUGBA, wife and journalist
Marriage is a relationship between a man and a woman of different backgrounds built on trust in each other with the aim of living together in harmony, joy and for interpersonal development.

RONKE AJAYI, wife, businesswoman and pastor
It is the oneness (covenant) achieved by the mutual coming together of a man and woman in holy matrimony in order to achieve cleaving, bonding, completeness and fulfillment till death brings a separation between them, speaking from God's perspective.

IFEYINWA AWAGU, wife, lawyer and social counselor
It is a covenant between man and woman for bonding and procreation of which the consent is indissoluble and irretrievable.

SAMUEL UNWENE, husband and decorative painter
Marriage is a union of love between a man and a woman for better or worse till death do them part.

STANLEY NJOKU, banker
Marriage is a legal union between a man and a woman.

UCHENDU ALAEFULE, husband and medical doctor
Medically speaking it is the state of emotional unification of two anatomically opposite sexes working together physiologically and mentally to achieve a stable, healthy family.

MOHAMMED FAWEHINMI, lawyer
Marriage is a unique, blessed union of a man and woman

FUNKE ADEGUN, CEO Xqwizit
Is the fusion of two souls
MR OLALEYE
Marriage is a union of two honest and committed like minds.

JET ONYEKACHI
Marriage is an institution of continous sharing, learning, tolerance and of giving.

YETUNDE ONIPEDE
Marriage is a legal Union between two persons who share things in common.

enobong kennedy
Marriage is companionship.
LOLADE SOWOOLU
Marriage is convenant of help and completion.
LANRE ODUKOYA
Eternal communion where the stretch of tolorance is limitless between a man and a woman who have the agreement to walk into it.

OLUSHOLA FASHUBA
It is a union between a matured man and a woman.
RONKE ONADEKO
It is punishment both in the kitchen and bedroom, but most times we all come out smiling.

BASKETMOUTH
Marriage is an agreement which the man loses his bachelor degree and the wife get her masters.

VICTOR UWAEZUOKE
Marriage is a place where you are a licenced 'Congo shinner'.

AYODEJI ONABANJO
Marriage is a day when a boy stands on the stage, watches every girl dressed so beautifully and thinks 'where the hell were these girls tillnno?

NOMORELOSS
A journey into the unknown.