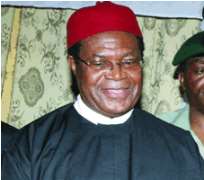 The ongoing Congresses of the Peoples Democratic Party, PDP, have been marred by widescale confusion, irregularities, violence and bloodletting. In acknowledgement of this failing, the National Chairman of the party, Dr Okwesileze Nwodo had pledged to annul all the congresses tainted with violence and other vices.

The avalanche of complaints also forced him to establish a hotline where aggrieved members of the party could easily launch their complaints. The move yielded positive results with as many as 25 complaints received within the initial 24 hours of operation.

But the snag was not just the disaffection but whether officials involved in the electoral process conducted their affairs in conformity with the party guidelines.

The upsurge in irregulaties and other forms of malfeasance arose mainly because the Ad hoc and National delegates election were vital to the election of the governorship candidates. Expectedly, the PDP governors used the security personnel at their disposal to subvert the processes to their advantage. In the North-eastern State of Taraba and Adamawa, aides of the governors allegedly took over the entire operations, carted away election materials and unduly compromised the party officials from Abuja. A journalist working in one of the affected states, told Daily Sun that there was no election.

The same scenario was witnessed in the South- south states of Bayelsa, and Cross Rivers States; even in the North-central States of Benue, Plateau, and Kaduna.

Reports of confusion and subversion of due process were also received from Abia, Anambra, Enugu, Osun, Lagos, Delta, Kwara, Imo and Ebonyi States. Nwodo at his wits end reacted sharply over the developments, warning of dire consequences for party officials and members involved in the malaise.

The violence in Oyo took a gruesome dimension with the death of about three party members including the factional chairman of the National Union of Road Transport Workers (NURTW) Lateef Salako, alias Eleweomo.

The appeal panels set up by the party to resolve the thorny issues arising from the congresses had not been able to douse the fire ignited, although the National Chairman had expressed confidence in their capacity to do so. Some aggrieved members were not however satisfied with Nwodo's assurances.

In Gombe State, five gubernatorial aspirants had vowed to take legal action if the exercise was allowed to stay.

Former ECOMOG commander, General Timothy Shelpedi who spoke on their behalf said their patience with the internal conflict resolution mechanism of the party was running thin. The others were the Deputy Speaker of House of Representatives, Hon Usman Bayero Nafada, former commissioner for finance and higher Education Alhaji Inuwa Yahaya, Bala Magaji, and Alhaji Al-hassan Fawu. 'We are calling on the National chairman of PDP to cancel the purported ward delegates' election forthwith in Gombe State. The entire process of the congress was surrounded in mystery by the state party machinery, leading to a systematic erosion of the internal party democracy as contained in the 2010 electoral act.

In Enugu, bomb threats, and a presidential directive to suspend the exercise failed. The fund between both factions of the party led by Nwodo, and governor Chime was discernible in the tension soaked exercise. A former senator, Chief Fidehis Okoro told journalists that the exercise was fruitful willy- nilly.

Governors loom large
The incapacity of organs of the party charged with maintenance of peace and unity could be traced to the larger-than-life image of the governors elected on the party's platform. Traditionally, the governors had constituted themselves into power brokers and tin gods of sorts dictating where the pendulum of power would tilt at all levels. The Senates's rejection of a clause in the amended. Electoral act 2010, which sought to make the Federal Lawmakers, automatic members of the National Executive Committee (NEC) of their political parties may have strengthened their hold on the levers of power in the party, President Goodluck Jonathan recently gave credence to their 'invincibility' when he described them as 'engine room' of the party.

Their power and influence go to the roots of the deepening crisis in the party. Director general of the Atiku campaign organization Chief Ben Obi, however expresses hope that they will be useful in the smooth conduct of the presidential primaries on January 13. In the run up to the current primaries, the governors had had their ways in almost everything – order of the primaries, the delegates issue, which has enhanced their successful run so far. They therefore hold the ace, for good or bad in the congresses.