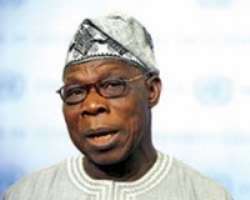 Meanwhile, former Vice President, Atiku Abubakar has urged South-South delegates to respect the zoning policy of the Peoples Democratic Party  (PDP) because of the zone's demographic weakness and posterity.

Atiku accused President Goodluck Jonathan of wanting to bribe each delegate with N2 million if he had succeeded in the exclusion of local council chairmen, state lawmakers and party chairmen as delegates.

The former president, who arrived the PDP premises about 1:00p.m. dressed in sky blue outfit asked whether the national chairman was in the office and when told that he was, he walked straight to the second floor of Wadata Plaza where the chairman's office is located.

The former president was joined by the Governor of Oyo State, Adebayo Alao-Akala and some other stalwarts of the party from Oyo, particularly those loyal to the camp of the governor of the state.

The Guardian learnt that because of the presence of the former president, the national chairman of PDP, Dr. Okwesilieze Nwodo, had to ask members of the Enugu State chapter who had come for the resolution of the chapter's crisis to wait.

At the meeting with Nwodo who was later joined by other members of the National Working Committee (NWC), Obasanjo lamented the crises that have engulfed the South West zone of the party and urged the leadership of the party to take urgent measures to restore peace, 'failing which the PDP faces a challenge of exodus of members,' Obasanjo said.

According to party sources, he singled out the killing of the PDP factional leader of the proscribed National Union of Road Transport Workers (NURTW), Alhaji Lateef Salako (Eleweomo) warning that it was time for the party to stand up and take drastic measures so as to avoid a recurrence which would give the opposition room to castigate PDP.

Obasanjo equally expressed his displeasure over the way and manner the party's congresses had been conducted so far, citing his state, Ogun, as a case study and pleaded with the NWC to take up the challenge.

In the case of Oyo State, he noted that grave as the challenge was, if the party took the right step, the issue could be resolved before the main elections. Sources said that the former president suggested to the party to set up a team to visit the South West and Oyo in particular with a view to assessing the situation on the ground.

He alerted the leadership of the party to the threat of the rival Action Congress of Nigeria (ACN) that has claimed some states in the South West and other political parties making inroad into the area stressing that 'if we don't wake up, things may become difficult for us a party in the zone.'

There was no member of the Senator Teslim Folarin's camp at the meeting.

The NWC members led by Nwodo, commended the former president for the mature approach he employed to tackle the problem of PDP in the zone, saying: 'This is a welcome development and it is what we expect leaders of the party to do at all levels.' The party also promised to 'do all that is possible to address the matter.'

The national chairman asked Alao-Akala and his entourage to remain behind for a meeting over the matter.

After the meeting, Obasanjo refused to respond to questions asked by journalists on his mission to the party headquarters until when asked: 'Are you still laughing?' He responded: 'May God never take laughter out of my mouth and out of your mouth.'

The NWC members later took a group photograph with him before he left the premises.

Immediately after Obasanjo's departure, the governor of Adamawa State, Admiral Murtala Nyako, arrived PDP secretariat and went straight to Nwodo's office. Before then, the national chairman had started a meeting with the chieftains of the Enugu State branch where the party structure is torn between the governor, Sullivan Chime and the national chairman.

As at the time of filing this report, the meeting was ongoing while the Oyo delegation was still waiting for its turn of the meeting.  Among the Oyo delegation were former governor, Omololu Olunloyo, deputy governor, Taofik Arapaja; former military governor of Lagos State, Brig. Gen. Raji Rasaki (rtd); Sola Filani and former minister of Justice, Richard Akinjide, among others.

It would be recalled that the crisis has stalled the planned congress in the state.

Atiku while addressing delegates at the Rivers State PDP secretariat in Port Harcourt yesterday, stressed that the power sharing policy of the party, made it possible for an Ijaw to be current President of the country.

He said: 'I was telling Bayelsa delegates that do you know that the whole of you are not up to one senatorial district in Kano? Let us be very thoughtful of what we are doing. I was telling some people last night that you want to abandon zoning, not so. You want to abandon zoning. As of today, 61 per cent of PDP delegates are from the North. I don't need to come here and talk to you.'

He added: 'All I need is to mobilise all the northern delegates to vote for me, even if I take 55 per cent of that 61 per cent, I am okay. You have only 31 per cent here in the South. The entire number of delegates from the South-South are not half of that of the North West. Tell me when it comes to numbers how you are going to win this election? Let us abide by the zoning policy made by this party because these are the stark realities. We are talking about figures and numbers.'

Atiku who was accompanied by former Governor of the Central Bank, Prof. Charles Soludo; former Information Minister, Prof. Sam Oyovbaire, Prince Tonye Princewill; the Deputy Zonal Coordinator in charge of Rivers and Bayelsa States and other members of his campaign team, said the events of the next one week are critical to the future of Nigeria.

Atiku insisted that the PDP had a zoning policy which is enshrined in its constitution and which every member of the party must abide by for the stability of the polity.

The former Vice President said if he was an over ambitious person, he would have in 2003 succumbed to pressure from PDP governors to vie for the party's presidential ticket against former President Obasanjo. According to him, he declined because of the zoning policy of the party.

'I have sacrificed the presidency in 1993 for the unity, peace and stability of this country by stepping down for Chief MKO Abiola. In 1998/99, the entire PDP machinery was in my hand. If I had been over ambitious like some people say, I would have given the PDP ticket to myself but I took PDP ticket to Obasanjo in his farm, who had just been released from jail. I said take the ticket. Come and be our president because I always put the interest of this country before mine' he said.

He said ironically, President Jonathan had three weeks ago sent a bill to the National Assembly with the intent of excluding state lawmakers, council chairmen and party chairmen as delegates. According to him, had the president not been resisted, he would have narrowed the democratic space, which ought to be expanded.

Rivers State Deputy Governor, Tele Ikuru told Atiku to be rest assured that having listened to him, the state delegates would definitely meet later to take decision on how to support him. According to Ikuru, every delegate is an adult and knows the direction the country should go.

Chairman of the state Council of Traditional Rulers, Amanyanabo of Kalabari, Prof. Theophilus Princewill Amachree told Atiku during his visit to the council secretariat to approach the primaries with decorum, devoid of acrimony, thuggery and any action that could bring about disrepute to his name.

He insisted that what Nigeria and Nigerians needed at this stage of her history were men and women of proven integrity imbued with selfless service to lead the country in unity to the desired destination.

Meanwhile, there was palpable anxiety on Tuesday in the  political camp of the Speaker of the House of Representatives, Dimeji Bankole as all the three candidates he sponsored to the PDP House of Assembly primaries in Ogun State lost.

The primaries had taken  place on Monday but were cancelled by the panel set up by the party's national body for the exercise. The panel's Secretary, Chief Obinna Nnaji who announced the annulment explained that the exercise was concluded before the arrival of the panel members which ordered a repeat on Tuesday.

But at the fresh exercise, all the three candidates presented by  Bankole, Mr. Sarafa Oloyunebi, Idowu Owolabi and Mr. Ganiyu Bankole were defeated at the exercise. Ganiyu is the Speaker's relation.

They contested at Bankole's (Speaker) Abeokuta South Federal constituency I and II. The candidates had participated in the Monday exercise which was later annulled.

Ganiyu was defeated in Odeda Federal Constituency by the factional Speaker of the State House of Assembly, Mr. Soyemi Coker while Oloyunebi was defeated by the immediate past Secretary of the Abeokuta South Local Council, Mr. Nurudeen Olaleye and  Owolabi was floored by Gbenga Ogunfolaji.

But Senator Jubril Martins-Kuye's group, which  organised its own parallel primaries on Monday refused to participate in yesterday's exercise, insisting that the panel that cancelled Monday's exercise did so illegally hence their action was null and void.

The Martins-Kuye group's  parallel executive is led by Chief Dayo Soremi while the other group which is being backed by Governor Gbenga Daniel is led by Joju Fadairo.

Soremi in a statement explained why they rejected the decision: 'Mr. Nnaji cannot give what he does not have. The powers to fix dates of primaries of our party have been exercised by the National Working Committee (NWC) and confirmed by the National Executive Council (NEC) of our great party. No individual, or group, panel or panelists can exercise such authority except  as a day-dream exercise in futility.

'The House of Assembly primaries in Ogun State conducted on January 3, 2011 were very peaceful as could be attested to by members of the media, SSS, police, CIB and INEC; we wonder why anybody could then be induced to create chaos, which is the predictable outcome of a so-called new primaries.

'It was clear that the Ogun State Governor, Gbenga Daniel and his faction, lost out woefully in the primaries conducted Monday, as the authentic members of the party whose names are in Abuja voted overwhelmingly for our aspirants who have now emerged as our party candidates.

'Documentary evidence in form of  pictures, video recordings, etc abound  to  show  that our primaries were conducted properly and peaceful.'