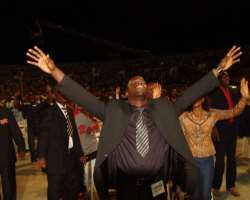 Members of Pastor Chris Oyakhilome's church were asked to part with a thousand naira to gain entry into the church for the New Year eve's service. Members who could not afford it were sent back home by security men at the gate. Reacting to the reports, Primate Elijah Ayodele of INRI Evangelical Spiritual Church said “Such pastor should be stoned to death or be crucified”.

He asked that the church be closed down and the government to investigate, calling it an abuse to Christianity – “It is a sacrilege and commercialization of Christianity”, he called it.

Other clerics and concerned individuals have asked that the government intervene.