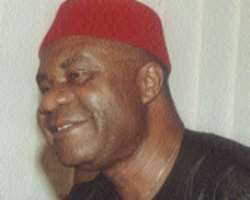 In the said appeal, Ogbulafor is challenging the judgment of the trial court which held that he had a case to answer in the N1.2 billion fraud charges brought against him and two others by the Federal Government.

In the ruling, Justice Bello said he had carefully and painstakingly considered the proof of evidence and statements of witnesses in the matter and came to the conclusion that the ex-PDP boss had some answers to offer in the alleged fraud.

Bello ruled that from the totality of the documents placed before the court, Ogbulafor and the two other accused persons were directly linked with the alleged fraud and must defend themselves.

Dissatisfied with the decision, Ogbulafor had approached the appellate court praying it to set the ruling aside.

When the case came up yesterday, Justice Bello adjourned the matter indefinitely pending the out come of the appeal.

At the trial court, Ogbulafor had filed a motion praying that the 14 - count criminal charge against him be dismissed on the ground that no case was disclosed against him. The court said that the action of Ogbulafor was too hasty because the prosecution had not opened the case.

The Federal Government had docked Ogbulafor, Emeka Ebilah and Emmanuel Nwoko accusing them of defrauding the country to the tune of N1.2B through phony contracts that were paid for.

They were alleged to have used seven different phony companies as conduit pipes through which the monies were paid out for contracts that were never awarded nor executed.

Ogbulafor was specifically alleged to have used his former position as Minister of Special Duties and member of the National Economic Intelligence Committee (NEIC) to perpetrate the alleged fraud.

But Ogbulafor through his counsel chief Joe Gadzama SAN, had asked the court to throw away the charges against him on the reason that no prime facie case was disclosed in the charge sheet.

He claimed that even is a prime facie case was disclosed in the charge sheet, he and the two other accused persons were not directly linked with the crime.

Ogbulafor also informed the court that the charge against him if allowed to stay, would not be sustained because of absence of sufficient evidence.

However Justice Bello while ruling on the motion said that it lacked merit and dismissed it.

The Judge said that the three accused persons would have to proof to the court on whether their link with the alleged crime was cogent enough during trial and not when the case has not been opened for witnesses to testify in the case.

Justice Bello then adjourned the case till November 9, 10 and 11 for hearing

The Independent corrupt practices Commission (ICPC) which charge the accused persons under section 26 of its Act 2000 was represented by barrister Paul Ahmed Bassi as prosecutor.