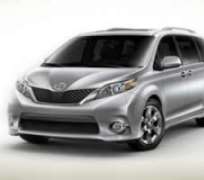 Prominent changes include a new entry-level four-cylinder version as well as a sport-tuned SE trim level.

The newest Sienna is virtually the same size as the outgoing version, and as before it can seat seven or eight passengers and has available all-wheel drive.

All trims come with front-wheel drive while the LE, XLE and Limited can also be had with all-wheel drive.  The base Sienna includes 17-inch alloy wheels, dual sliding rear doors with power-down windows, triple-zone air-conditioning, full power accessories, a telescoping steering wheel, cruise control and a four-speaker CD/MP3 stereo with an auxiliary audio jack.

According to emons motoring experts, the sport-themed SE is equipped similarly to the LE V6 but adds more 'aggressive styling via 19-inch alloy wheels, a unique front fascia (with foglights, mesh inserts and a larger air intake), lower body skirting and tinted head- and taillights'.

Available information indicates that options on the Toyota Sienna are grouped into packages that vary based on trim level and buying region.

Notable highlights include xenon headlights, rain-sensing wipers, adaptive cruise control, a rear-seat DVD entertainment system (with a large screen that can be split to display two different sources) and a navigation system (with a back-up camera).

Base and LE models come with a 2.7-liter inline-4 that makes 187 horsepower.

Available on those two trims and standard on all others is a 265-horse power 3.5-liter V6. Both engines come matched to a six-speed automatic transmission.

The Sienna LE, XLE and Limited V6 models can also be had with all-wheel drive.

In terms of safety, antilock disc brakes, stability control, traction control, a windshield de-icer and a full complement of airbags (including driver knee, front-seat side and full-length side curtain) are standard on all 2011 Toyota Sienna models. The LE adds a rearview camera (with the monitor integrated into the rearview mirror).