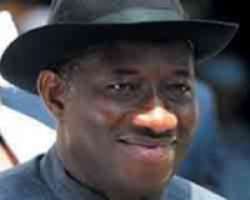 And pleased with the endorsement, President Jonathan who said he was disposed to political debates with his opponents, promised the people of the South-South geopolitical zone that he would not disappoint them and the rest of Nigeria if elected into office next year.

However, former Vice President Atiku Abubakar's bid for Jonathan's job received a boost yesterday as Enugu State House of Assembly endorsed him, describing the Turaki Adamawa as the most experienced aspirant in the race so far.

South-South zonal coordinator and Cross River State Governor Liyel Imoke, said the zonal delegates are committed to a formidable Jonathan/ Sambo ticket because it offers great hope not only for the Niger Delta and Nigeria but the entire African continent.

Imoke noted that for the first time in Nigeria's history, the country has two people in the persons of the president and his deputy who are truly qualified beyond any doubt to occupy the highest office in the land.

He observed that though some people have produced a consensus aspirant but as far as the zone was concerned, there was another ticket with better credentials.

Imoke explained that though the president was asked not to campaign in the zone, he insisted on the visit because of his commitment to internal democracy, transparency and a credible process acceptable to a majority of Nigerians.

'With the President, we have the only ticket in the federation that is complete. We are starting from the known to the unknown. We have two leaders who are true democrats,' he said.

According to the governor, the president does not need to campaign in the zone, adding that it would be extremely difficult for anyone to match the Jonathan/ Sambo ticket at the PDP presidential primary.

South-South governors had tried to prevail on the President not to dissipate his energy to come to the zone to campaign because he already has support of the people but he insisted on the visit in compliance with democratic norm.

After a conference of the delegates from the zone, a member of the House of Representatives, Tunde Akogun moved a motion for the endorsement of the Jonathan/Sambo ticket and it was seconded by the Speaker of the Rivers State House of Assembly, Tonye Harry.

Present were the governors of Akwa-Ibom, the Acting Governor of Delta State, Sam Obi, Minister of Foreign Affairs, Minister of Petroleum, former Senate President Joseph Wayas, Ijaw elderstatesman, Edwin Clark, the Speakers of the State Houses of Assembly, members of the National Assembly and other party faithfuls.

Jonathan who was accompanied by Sambo, said he was overwhelmed by the level of support he received from the South-South.

He said: 'It's difficult to entrust the country in the hands of somebody from a very unknown area. And by divine providence I am now the president of Nigeria and I am now asking for fresh mandate of Nigerians to go back.

The president acknowledged that the country was facing some security challenges but promised that this would soon be taken care off as there was a plan to set up a special well-equipped body to tackle issues related to terrorism.

Chief Tony Anenih, who spoke on behalf of elders of the zone, observed that there were challenges ahead of the primaries created by insincerity and deceit.

He noted that there were desperate aspirants who wanted to make peaceful change impossible but the region would remain peaceful and make change through the ballot.

Anineh urged lawmakers from the zone in the National Assembly to solicit the support of their colleagues ahead of the primary. He warned that by no mistake should a single vote be given to Atiku.

Meanwhile, Atiku has restated his support for the emergence of an Igbo man as the president of the country by 2015, stressing that it was the only way of truly ending the civil war.

The position of the Enugu Assembly was expressed by the Speaker of the Assembly, Eugene Odoh, who also praised the former Vice President for his fight and resilience for democracy.

Amid thunderous ovation from the members, Odoh said at the special session held at the hallowed chamber of the Assembly to receive the presidential team of Abubakar, Odoh said the Assembly would go the extra-mile to ensure that they support the course which he is currently spearheading.

He said: 'Enugu Assembly will go extra length to show full support to the course which has brought to the House of Assembly today. You are the most experienced of all aspirants in the race having experienced presidency for eight years. What you have told us today are facts and when we heard of your visit, we decided to turn out in our numbers to receive you. We have been humbled by your wordings, our President-to- be and by the grace of God, you will be there.

'We had you one-on-one and it is my hope that we'll vote according to our conscience. The Igbo man has conscience and having suffered for this great country, we will not let you down. Members of this House of Assembly are courageous. This is one of the Houses that voted for the autonomy of the legislature and we know the right thing to do' .

Odoh's remarks were intermittently punctuated by praise songs from the legislators who all turned out to receive the former Vice President.

Speaking earlier, Abubakar said he was committed to a point of passion to ensuring that the south east produced the president by 2015, saying 'I've made this commitment in the past. Ben Obi was my running-mate when I took refuse in the Action Congress of Nigeria. Northern leaders Political Forum and Igbo Political Forum have reached for an agreement to ensure that by 2015, the presidency comes back to south east.

The presidential aspirant later met with members of Anambra state House of Assembly in a private hotel in the state. He is scheduled to meet with Abia and Imo State Assembly members in Owerri today (Friday).