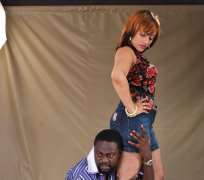 Beautiful and award winning Nollywood actress Lilian Bach, who recently made her foray into movie production, rolls out gigantic plans for her recent job; a comedy movie titled 'Eletan'.

Speaking on the movie she said “If you follow my career, right from the very beginning, you will notice that I didn't feature in all the movies that came my way; this is because I have never believed in volume, I believe in quality. I and my team have put in a lot of effort into making 'Eletan' a film of international standard.

The movie Eletan which casts A list actors like Lilian Bach herself, Yemi Blaq, Ireti Osayemi, Muyiwa Adegoke, Mr Latin, Baba Wande, Ijesha, and Londoner tells the tale of a young smart lady who wants to eat her cake and have it but her smartness soon lands her in trouble. Bakky Adeoye is also part of the movie production.

The Terracotta award winner speaking on why she decided to make the movie comical she said, “To me, it is a comedy because I've looked around and I realized that in this period of ours, everyone is so tensed-up. Of course, I have a massage to pass on, but I didn't want it to appear too serious because at this period, we are facing all kinds of things in Nigeria, the political scene, hard times and everybody seems to be bothered about one thing or the other; so I wanted something that can get people laughing and relaxed while they learn alongside.

Reacting to the movie, Mr Latin a popular Yoruba actor confessed that Eletan is the best role he has ever played since he's been acting.