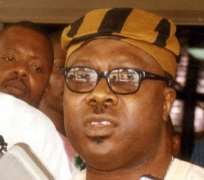 SAN FRANCISCO, Dec 29, (THEWILL) - The Action Congress of Nigeria (ACN) has said the plan to impeach Governor Rauf Aregbesola of Osun state is real, contrary to the denial by some of those involved, but warned that such plan would precipitate a crisis of epic proportions, the end of which no one can predict.

In a statement issued in Lagos on Wednesday by its National Publicity Secretary, Alhaji Lai Mohammed, the party said the Chairman of the Senate Appropriations Committee, Senator Iyiola Omisore, is the linchpin of the impeachment plot, which he sees as his only avenue to the governorship of the state.

It said Omisore is alleged to be working in collusion with a principal officer of the Senate, with whom he had been involved in a number of unsavoury deals - the same reason Omisore is seeking the governorship by hook or crook so the accompanying immunity can shield him from the law.

ACN said the three-pronged plan involves suspending two ACN members of the Osun House of Assembly, so that the PDP-dominated house can have the required two-thirds majority to carry out the impeachment; massive bribery of the lawmakers from a huge war chest which the principal officer helped to raise, and the compromising of the security agencies and the judiciary.

''But we have every reason to believe that the legislators in Osun state are peace-loving people, who will resist any attempt by anyone, no matter how highly placed or what dirty carrot he is dangling, to destabilise a state that is just emerging from years of misrule by an illegitimate government. We also expect that the security agencies and the judiciary will resist any cheap attempt to compromise them.

''However, for those who will allow themselves to be used to set Osun state back and return the good people of the state to the era of bondage, we have a warning for them: Don't try it, because it will end up consuming you!'' the party said.

It said the recent unprovoked, mindless and ill-informed excoriation of the judiciary by Omisore, over the widely-acclaimed judgement of the Court of Appeal that gave victory to Gov. Aregbesola, was aimed at preparing the basis for the deluded Senator to push on with his impeachment plan.

''Afterall, he must have reasoned, if Aregbesola can get to the exalted seat through the courts, he too can use impeachment to attain his pipe dream. There is a difference between the two: One is legitimate, the other is illegal!

''But beyond that, the people of Osun are not ready to succumb to the antics of a shady character, whose only claim to the state's governorship is to realise his inordinate ambition and also seek the protective cover of immunity, if only to escape the sure repercussions of his past misdeeds. Osun people do not want the bloodbath that this linchpin is threatening. They do not want the chaos and violence that he has deployed to telling effect in the past. Osun people want peace and progress, which an Aregbesola governorship is already delivering to the state,'' ACN said.

''The Court of Appeal judgement on Osun is not final because it is infallible, it is rather infallible because it is final. We hope this makes some sense to the anarchists and ill-informed commentators on the judgement,'' it said.