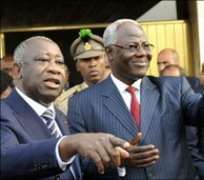 Incumbent Ivory Coast President Laurent Gbagbo could be offered refuge in the US as a means to end the country's political crisis, US officials say.

Washington could help Mr Gbagbo make a "dignified exit", but this opportunity was "rapidly closing", they said.

The comments came as a delegation of African leaders met Mr Gbagbo in a fresh attempt to persuade him to step down following disputed elections.

West African states have said they will remove him by force if he does not.

The UN and the African Union regard Mr Gbagbo's rival, Alassane Ouattara, as the winner of the 28 November election.

Leaders Boni Yayi from Benin, Pedro Pires from Cape Verde and Ernest Bai Koroma from Sierra Leone - who represent the Economic Community of West African States (Ecowas) - were due to make an amnesty offer to Mr Gbagbo if he quit. They were joined for this trip by Kenyan Prime Minister Raila Odinga, representing the African Union.

They were received by a smiling Mr Gbagbo, AFP news agency said.

Afterwards, Mr Odinga described the meeting as "useful", and Mr Yayi said they would return. They then went on to see Mr Ouattara.

After their meeting, Mr Ouattara said that the dialogue was over.

"Everything has been done so that we could find a solution through diplomacy and dialogue," he said.

"Since that is not the case, perhaps Laurent Gbagbo will have a change of heart. If not, then Ecowas will need to use all the means at its disposal including the use of legitimate force so that the president that was elected can assume his functions."

It is the diplomats' second visit in less than a week. Last Tuesday they flew to Abidjan, Ivory Coast's commercial capital, but failed to convince Mr Gbagbo to stand down.

Guarantees
Sierra Leone's Information Minister, Ibrahim Ben-Kargbo, said the leaders would tell Mr Gbagbo to step down and did not intend to negotiate with him.

But a source within the African delegation told the BBC that the incumbent would be offered a legal amnesty, as well as a guarantee that his financial assets would be secure if he left office.

Later, unnamed US officials said Mr Gbagbo might be allowed to travel to the US, and that he had relatives in the state of Georgia.

"We want to see him leave. If he wishes to come here, we of course would entertain that as a means of resolving the current situation," a senior State Department official told AFP news agency.

"But any opportunity to do that is an opportunity that is rapidly closing because of what is happening on the ground, and every indication we have at this point is that he's digging in."

A spokesman for Mr Gbagbo, Ohoupa Sessegnon, told the BBC any offer of an amnesty would be rejected.

UN peacekeepers in the country say security forces have twice blocked them from visiting the site of one of two alleged mass graves.

The UN has also expressed concern that some of the homes of opponents to Mr Gbagbo have been marked to identify the ethnicity of their occupants.

The Gbagbo camp has denied sanctioning abuses.
UN peacekeepers are protecting Mr Ouattara, who is holed up at a hotel in Abidjan. Mr Gbagbo has called on the 10,000-strong UN force to leave the country.

The election was intended to reunify Ivory Coast - the world's leading cocoa producer - which has been divided since a 2002 conflict.

Mr Ouattara was initially proclaimed the winner by the country's election commission - a verdict backed by the UN, which helped organise the poll.

But the Constitutional Council, headed by an ally of Mr Gbagbo, said he had won, citing irregularities in the north which is controlled by former rebels supporting Mr Ouattara.

Both men have been sworn in as president.