By The PM News, Nigeria 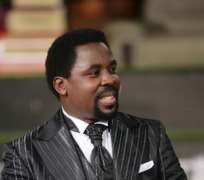 The founder of the Synagogue, Church of All Nations (SCOAN), Prophet TB Joshua turns 46 on June 12th 2009. Prophet Joshua, who began his ministry about 20 years ago, was born in Arigidi-Akoko, Ondo State, Nigeria.

His is a unique sort of healing and prophecy ministry that combines preaching the gospel with extensive charity work on such a large scale that puts his ministry at the services of all, irrespective of creed or race.

Speaking to a large congregation at The Synagogue Church last Sunday, Prophet Joshua enjoined the faithful to be true to the teachings of Jesus Christ by always giving to the less privileged. This is in keeping with his policy of “spend more on others and less on ourselves”.

To celebrate his birthday this year therefore, the prophet asked all who would have given anything to contribute to his birthday, to put such gifts together and give them away to the needy, rather than to himself, as he celebrates his 46th birthday. He also said that anyone who wished to make paid newspaper announcements to congratulate him on the occasion should monetise such gestures and give them away to the under-privileged.

“Another June 12th is at hand, so I want to say happy birthday in advance,” said the prophet. “As we all know, we are the father to the orphans, husband to the widows, benefactors to the needy and companions to the lonely. This coming Friday, I want you to go out and celebrate with them, or invite them to your house and rededicate yourself to the act of giving in terms of food, shelter, scholarships to the less privileged. This is what we are born for, what we are to live for and what we are to die for. ”

The prophet reflected on his own life by playing back a recorded video of his early ministry, his 40-day and night fast at the prayer mountain and the hardships he went through to build his first, second and third churches, which were all destroyed by the elements. It was a heart-rending story from which Pastor Joshua encouraged the congregation to learn the lessons of the hard knocks of life.

No one, he remarked, should think that adversity was meant to destroy them. Rather, we should draw strength from setbacks for, he said, “God can use disappointment to preserve you for redemption, strengthen your desire for God and prepare you for the challenges ahead.”

Finally, to the worshippers, visitors and viewers of Emmanuel TV, worldwide, the prophet emphasised the virtues of charity, describing as “vanity upon vanity” a situation where a man parks 10 jeeps or stores excess worldly possessions in his garage in a country where many cannot find a single meal to eat in a day. People must continue to give cheerfully, to be their brother's keepers, he finalised. “Someone is waiting for you for a lifetime. You cannot afford to fail them. Failing them is failing God...”