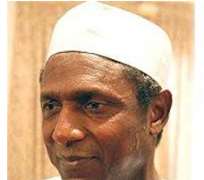 
Nigerian President Umaru Yar'Adua has dismissed the country's chief of the defence staff together with the heads of the army and navy.

Mr Yar'Adua made the announcement before going on a pilgrimage to Mecca.

No reason has yet been given for the surprise dismissals, but an official statement said the men were retiring, a BBC correspondent in Abuja said.

The move appears to be the first major change to Nigeria's military since Mr Yar'Adua came to office.

The announcement was made at a press conference at the presidential villa in the capital, Abuja.

The head of the air force, Air Marshal Paul Dike, has been promoted to become overall defence chief, the country's top military position.

The BBC's Chris Ewokor in Abuja said that such dismissals usually only take place where there has been evidence of a threat to the government and it could be that the men had fallen out of favour with Mr Yar'Adua.

The governing People's Democratic Party (PDP) had earlier held a press conference to criticise a group of political opponents who had been calling for the removal of the present government.

Our correspondent said the sackings were a bold move in a country that has had more military governments than civilian ones in almost 50 years of independence.

Earlier this month, Mr Yar'Adua suspended the head of the government agency responsible for the development of the oil-producing Niger Delta over allegations of corruption.