MY WIFE WAS CUSTOM-MADE FOR ME â€“ DR D. K. OLUKOYA 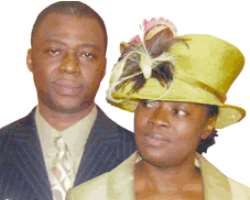 Dr Daniel Kolawole Olukoya is the General Overseer of Mountain of Fire and Miracles Ministries. He holds a first class Honors degree in Microbiology from the University of Lagos, Nigeria and a Ph.D in Molecular Genetics from the University of Reading, United Kingdom. As a researcher, he has over seventy scientific publications to his credit.

Mountain of Fire and Miracles Ministries is devoted to the revival of Apostolic signs, Holy Ghost fireworks and the unlimited demonstration of the power of God to deliver the uttermost. At MFM , absolute holiness is preached openly. It is a do-it-yourself gospel ministry, where your hands are trained to wage war and your fingers to fight.

He passionately desires to see God's people set free from bondage and to assist them in fulfilling their God-given destinies with the teachings of the Bible applied in all areas of their lives.

As a prophet, evangelist, teacher, role model and preacher of the Word, Dr Olukoya continues to spread the message of God's power to restore, break yokes and salvation to all nations thereby bringing about a harvest of deliverance and spiritual breakthrough by the power of the Holy Ghost. As a researcher with a profound prophetic insight into the realm of the spiritual, he has produced a wealth of publications including the best selling Prayer Rain.

He is happily married to Pastor Folashade Olukoya and blessed with a son, Elijah Toluwani. In this interview, he reveals a lot about his ministry and journey with the Almighty. At Gen. 2:18 forum recently the couple went down memory lane about their relationship. Excerpts.

Tell us how you started the ministry and how eventually you married your wife?

When I got born again in 1974, one of the principles we were taught which unfortunately is not generally taught these days, is that you must have at least one way by which God speaks to you and that you must be in regular communion with the Lord. In those days, we went for retreats, we prayed, we did dry fasting, and all kinds of spiritual exercises which kept us attuned. I learned to hear from God and after that all other things followed. When God revealed the vision of Mountain of Fire & Miracles Ministry, I was in bed and I heard this voice like a rolling thunder, speaking by the door.

I ran to the door , because our church did not teach us how to hear from God. I didn't know who was talking, I didn't see anybody at the door. I ran back to my bed. The second time, I now heard a voice which said, 'Son, remember Samuel…'. I went back to bed again and then God spoke about Mountain of Fire & Miracles Ministries. This is why we try to teach young people how to hear from God. When you know how to hear from God, your progress begins. You don't make terrible mistakes.

If there's one thing I really thank God for, it's the ability to hear what he has to say to me. By my calling, I don't need to go to the mountain to pray or hide in a corner to pray , before I know what God is saying. That did not happen suddenly. It happened as a result of building-up, praying and consecration. When I was in secondary school, I didn't have a girlfriend. I was not interested. I read more of my books and I served God. I didn't do random sampling trying this and trying that. I just relied on God rest assured that when the time comes,

He would show me whom to marry. That was how it was until I met her. I met her in the course of my ministration. She was a chorister in another church I was invited to minister. It was the first time I met her and nothing happened then.

Were you attracted to her when you saw her ministering in the choir?

Let me simplify it. The first time I met my wonderful wife was when she was singing as a member of a choir in a church I was invited to minister . That was how I got to know her. Later, I was in a place called Tresting. It's somewhere on the mountains in Italy. I went there for a conference. One night too, as I was saying my prayers I prayed about marriage.

I asked God for a woman who would want to work and fit into what God wanted me to do and the Lord brought her image. I wasn't sleeping o. It wasn't a dream, and God said 'this is the woman'. Again, I prayed three times and got the same answer ' this is the woman'. That was my first testimony. My father , who was a pastor also prayed. He had never seen her, but when he visited Lagos and saw her for the first time, he said '… this is the woman I saw too'. It's not a question of I feel led, or I think so, I heard and I saw before I took a step.

Wife's account
When G.O came, did he quote the scriptures or did he say I love you? What exactly did he say?

When I first met my husband, I was a chorister. I was very inexperienced and all I knew was to serve my God. I was brought up that way. He was then a music director who came to our church to improve the performance of the choir . We used to call him brother Daniel. There was really nothing on my mind than we had a nice brother who was coming to teach us in the choir. He was down to earth and straightforward. Anytime he came we enjoyed his teaching. We always wanted him around because we learned a lot from him; more than the songs he taught us.

At a time, he had to go overseas in pursuit of his education. He went for his doctorate then. We didn't know much about that. We were young and just coming to church. We expected him to come, but he didn't and we learned later that he had traveled. It was like a little child eating a nice piece of cake and somebody came from the blues, snatched away the cake.

At a time, he now came to the church, not as a music director but as a preacher. That was the time he met me. I met him when he was a music director he met me when he was a preacher. Bro Daniel returned to the country , but now as a firebrand. We wanted to grow in the Lord. We always wanted to learn from him. He had that pleasant aura, just magnetizing people to the knowledge of God. I was even invited to the fellowship then in the house. We prayed and I had to leave again to pursue my education. I was far away in Ife. On one of his visits, I think he was going to Ondo town then. I think at that time he had received the vision. I hadn't received anything then. I was just living my normal life I think, but he proposed to me before I left for Ife.

What was it like as he proposed to you?
It was like he was maybe prophesying or speaking in tongues. It wasn't the kind of language you would expect from young people… you know something like, I'm in love with you. That day, he called me and we were in a small room where we normally had our fellowship. He used to do his counseling there too. I was thinking within me when I heard he wanted to see me and I wondered oh my God, have I done anything wrong? What has the man of God got to say to me today?

I was on dry fasting as well trying to see a man of God. In preparation for that visit, I was praying and wondered oh God, what is this meeting all about? And he said to me 'simple'. Just as he writes his books, he's a man of not too many words but action backed up by the power of God. I'm not praising anyone , but I'm saying the truth from the bottom of my heart. That day, he talked to me and he said, 'God is laying it in my heart that you are my wife. Simple'. It was like I was in another planet trying to come back. Before I said anything, he just said to me, 'you have enough time, you go and pray'. I had to leave for Ife then.

When he visited, it was like an inquiry about what went on after the appointment. The result of my prayer and things like that. When I got to Ife, it was like God prepared that place for me to have a personal encounter on the issue. To me, it was a matter of life and death, because of our Christian background . We prayed over everything, committed everything into Gods hands. We didn't do anything without hearing from God. For the first time in my life, we did marathon fasting. I fasted for 3 days just to ensure that I was getting it right.

Just to get a yes or no. While I was praying, I had the idea of having a very pleasant marriage and a man I can call my brother, my friend. True love comes from the heart . I prayed to the Lord that I didn't want deceit, I didn't want to make a mistake. I wanted a happy marriage and God confirmed his word. God confirmed it by showing a revelation to me . As an artist , I was able to do a sketch for my own future reference. God showed him to me. I was actually presented to him. That was when I knew God had a hand in it. I was not really matured enough to say I heard God's voice . God gave me that revelation and gave me witnesses as well to back it up. I prayed to God and I was happy. I had peace within me and I could see the future becoming bright.

I was confident that I was doing the right thing. I told him what the result of my prayers was and he asked when was my next birthday. I told him and he said to me, you share the same birthday with me. The relationship was not based on maybe because we shared the same birthday. We actually knew about that at that point in time. It made the relationship even more special to me and from there we started. We attended prayer meetings together. At first, we were meeting on Tuesdays . Then he gave me topics to talk about .He was a very good moderator, and he gave me just10 minutes to speak on a particular topic. We discussed and we prayed together. We enjoyed every bit of our courtship.

How long was the courtship? Were you tempted to indulge in pre-marital sex?

Pastor Olukoya:
The courtship lasted about a year and a few months. Like I told you, before I got born again in 1974 the Lord had been helping me. I never got into trouble like other people did.. So, the question of temptation did not come in a way that most people talk about temptation now. When we meet, we are meeting on purpose to study the word, discuss and go.

As a man of God, how many women in your congregation want to have a relationship with you?

The bible says flee from all appearances of evil. The best thing is to flee and not wait. Don't wait for it to develop.