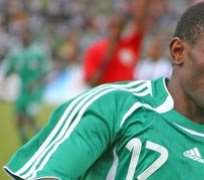 Another twist has been added to the uncertain future of former international striker, Ayodele Makinwa, as he flatly turned down a pay-as-you-play deal at troubled Greek club, Iraklis.

Makinwa is on a season-long loan deal from Italian club Lazio, but he has not exactly set the Greek league on fire, leading to rife speculations over his future.

Officials have said that Makinwa had refused an option to be paid according to his appearances for Larissa. 'The way this works is by the number of minutes you are on the pitch. It's for the player and club to determine who much he will be paid if he in action for 20 minutes or 30 minutes,' disclosed top Greek journalist, Souskas Lazaros.

So far, Makinwa has appeared in 10 matches and scored a goal. A further breakdown of the appearances showed that he started two of those games and came on as a substitute in the other eight matches. He has only started and finished a game.

At the beginning of the season, Larissa was apprehensive about the big striker's knee and had even contemplated cancelling the transfer. Makinwa's situation is expected to be a lot clearer when the winter transfer window re-opens in the new year.

Another Nigerian player facing an uncertain future in Greece is Abraham Alechenu.

Left back Alechenu has been frozen out at Iraklis even after he fully recovered from a horrific ankle injury that he suffered almost on arrival in the summer from Albania.

It could now well be that his three-year contract is cancelled and he will be paid off the remainder of his first year.