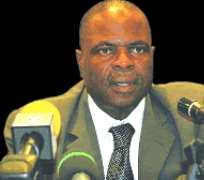 According to EFCC spokesman, Femi Babafemi: 'We invited Adamu after he finally arrived in the country on Friday and he has been at our office in Abuja since Wednesday morning.'

Babafemi said that the anti-corruption body was interrogating Adamu over how the N24 billion (about 190 million dollars) budgeted for the 2003 All Africa Games of which he was the chief executive was spent.

Adamu will also have to explain another N1.3 billion, which he purportedly spent as “PR”, Babafemi added. He also said Adamu was being quizzed for another N180 million in an affair concerning his wife as well as N80 million expenditure involving his son-in-law.

Last month, Adamu was suspended by FIFA for three years after the world football's governing body ruled that he had breached its code of ethics. Adamu was caught in a sting operation by a British newspaper over the hosting rights bids for the 2018 and 2022 World Cups.

'For now, the investigations are on and we do not know when he will be allowed to leave our office,' Babafemi said. The CAF executive former member was until last night still being detained by the anti graft agency but the agency's spokesman disclosed that he could be allowed home if he deposits of his international passport.