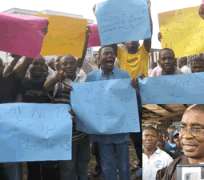 Traders protesting at the entrance to the market.

Traders from the Association of Progressive Traders market (APT) in Lagos were thrown into confusion recently, when they discovered that their place of business had been locked-up with stern looking military men on guard.

Some of the traders who spoke to Daily Sun lamented that the crisis in the market had adversely affected their business as they spent most of their time settling one dispute or the other. A youth leader, Obunike Agu explained that with the yuletide at its peak, any election at the market now would only disrupt their business schedule.

And to express their disapproval over another disruption in their activities, the traders held a peaceful demonstration over a court injunction, which directed that elections be conducted on the December 16, 2010.

Initially the same court had advised their counsel to conduct the election between January 3 and January 13, 2011. The protest has since led to the postponement of the election indefinitely. Daily Sun gathered that the market has been rocked by leadership crisis since two years ago with both parties at loggerheads over who manages the affairs of the Association.

In an ex-parte motion obtained by one of the parties from Federal High Court Lagos, in suit No: FHC/L/CS/5309/2008, a copy of which was made available to Daily Sun, an order was given compelling the electoral chairman, Mr. Peter Ubanagu Udah and members of the electoral committee to conduct general elections not later than 16th of December, 2010.

The motion also compelled the chairman and members of the electoral committee to use open secret ballot system as the mode of casting votes by accredited members eligible to vote.

In his reaction, secretary of the association, Mr. Christian Okosa explained that the ex-parte motion lacks merit and is an attempt to oppress the traders.

He said the call for election involving over 10,000 persons to be held within 24 hours is an attempt to create chaos and rig the election.

He also told Daily Sun that the order compelling the association to organize the election using the open secret ballot ran contrary to the wishes of the traders who already settled for option A4 whereby the traders would queue behind their candidate.

He wondered why the same court that ruled that election be held before January 13 2011, turned around again to grant an ex-parte motion directing the association to conduct election on the 16th of December 2010.

Further, he said the short notice made it impossible for the police to provide adequate security for the successful conduct of an election.

Mr. Okosa called on the judiciary, the police and other law enforcement agencies not to be biased so that peace would reign in the market.

While giving insight into the genesis of the crisis, vice chairman of the association, Sir Peter Egbuna told Daily Sun that it was the opposition that has been disturbing the market for over two years.

'They took the executive members of the market to court and in the last appearance the judge adjourned the case to January 13, 2011 and mandated the counsels to help us see that the union election is conducted before that date. Unfortunately on Wednesday 15th December 2010, about few minutes to 2 O'clock, one guy came to my office with a letter he said was from the High Court. The paper wanted our union to conducted election the following day.

'Later at about 2:30pm, the electoral committee chairman, Mr. Peter Udah passed a circular to members, which I happen to be one, calling for a meeting in his office. We protested the time of the meeting but later went for the meeting. As we were in the meeting, most of our members trooped into the meeting demanding for their I.D. cards, which was agreed to be given to members before the election. This will enable members to know those who are eligible to vote and be voted for. It was after this that he presented the court injunction to them. But members made it clear to him that they were not party to any court-ordered election the following day, insisting that they could not do elections without their I.D cards. As I talk to you now, about 3pm on Thursday, 16 December 2010, the day of the election, the electoral chairman is still in possession of the I.D. cards.

'I, as a member of the electoral committee don't even have an idea of what is going on. So, how can we run election today? Besides, before we could finish the meeting yesterday the market was already closed. So, how do you announce to members that election would hold the following day? So, that is the mess we have found ourselves in. Moreover, I don't know where they got the soldiers. We are in a democracy. It is not the duty of soldiers to conduct election. If it were the police then we can be sure that they would give us protection needed for the conduct of the election. You can see that the market is disturbed by the presence of soldiers. The banks didn't open and our customers who came from far and near could not transact their business today just because of the activities of the electoral committee chairman and the opposition members.'

Mr. Egbuna alleged that one of the contestants is a relation of the Electoral Committee Chairman. He said such arrangements would not guarantee free and fair elections

He said that for peace to return to the market, the union should be allowed to conduct its election peacefully according to their method of Option A4, which is to queue behind their candidate. According to him, the Commissioner of Police has promised to provide adequate security any time the traders are ready for election.