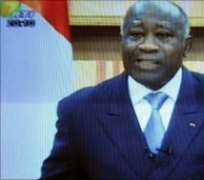 The statement came at the end of emergency talks on the crisis sparked by a disputed election last month.

The 15-member bloc and other international bodies have recognised his rival Alassane Ouattara as winner.

The election was meant to unite the country after a civil war in 2002 split the world's largest cocoa producer in two.

On Thursday state television, one of the key elements keeping Mr Gbagbo in power, was taken off the air in areas outside Abidjan.

But amid the mounting international pressure, the incumbent president remained defiant, declaring illegal a decision by the West African central bank to give control of his country's account to Mr Ouattara.

His spokesman Ahoua Don Mello read a communique on TV saying it was "illegal and manifestly outside the competence of the West African Monetary Union", and there would be "serious consequences".

Earlier Mr Ouattara urged the country's armed forces to play a "republican role" and protect civilians against attack from "the militias and foreign mercenaries that are spilling Ivorian blood".

He accused Mr Gbagbo of opening a new chapter of violence.

"Violence is returning to our towns and our city neighbourhoods. Serious human rights violations are reported from all corners," he said, quoted by AFP news agency.

He thanked the international community for the support it had given him so far.

He said perpetrators of recent violence would be prosecuted and invited investigators from the International Criminal Court to visit the country.

The UN says more than 170 people have been killed in the past week in attacks linked to the Ivorian armed forces, who remain publicly loyal to Mr Gbagbo.

No power-sharing
Ecowas said after its summit in Abuja, Nigeria, that it would send an envoy to the country to meet Mr Gbagbo.

It would also convene a meeting of defence ministers to plan military action if he refused to back down, it said.

Before the talks, Nigerian Foreign Minister Odein Ajumogobia ruled out a power-sharing arrangement between the rivals like those set up in Kenya and Zimbabwe following disputed elections.

The BBC's Thomas Fessy in the main city Abidjan says the pressure from Ecowas has not come as a surprise, and means that Mr Gbagbo is now definitely boxed in on all sides.

The Ecowas chairman, Nigerian President Goodluck Jonathan, has already written personally to Mr Gbagbo to ask him to step down, and offered him refuge.

There have been suggestions that member nations send in troops to strengthen the presence of the UN peacekeeping force, which has about 10,000 troops on the ground.

Ecowas sent peacekeeping forces to Liberia and Sierra Leone during their civil wars in the 1990s.