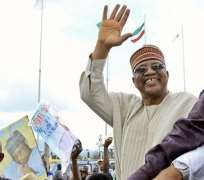 Everybody except Ibrahim Babangida and his hangers-on knew that his foray into the 2011 presidential race was bound to come to grief. In the history of Nigeria, few individuals are as passionately loathed and distrusted as the toothy retired general. In fact few Nigerians would buy a used car from the man who misruled Nigeria for eight years. Babangida in his prime was bad news; so bad those in decent circles you might be told to rinse your mouth with disinfectant for mentioning his name. Now he wants to be our ‘Northern’ president – what a sorry climb-down for a man who once derived his powers from the barrel of the federal gun!

Admittedly, it would have been odd if the zoning/consensus hoax orchestrated by Adamu Ciroma had not featured a Babangida. The contest was not about integrity; no one, not even Ciroma, ever said it was. So he insulted the nation with a list of men with putrid baggage. Till date, Babangida is yet to answer questions on the murder of Dele Giwa; Nigerians have simply refused to forget the blood curdling dismemberment of the fiery journalist. That killing signified the point at which this country turned the corner and introduced bombing as a means of ‘deleting’ perceived opponents. We have since witnessed that style of elimination on the world stage. The suicide bombers of the Middle East and the latter-day ‘militants’ of our Niger Delta region ought to be sued for infringing on someone’s patent for inventing the novel tool for separating the human body from its spirit.

Before Babangida overthrew his boss, Muhammadu Buhari and declared himself military president and commander-in-chief, looting of public funds used to be in the thousands with the occasional millions –with the possible exception of the $2.8 billion NNPC funds saga which came to light during the Shagari regime but which the Irikefe tribunal eventually declared as ‘not missing’ without telling us from whose account it had been retrieved. But during the Babangida years, looting was a government policy. The regime was noted for offering its opponents two options: (a) Accept a fat bribe and toe our line – in the parlance of the day, let us ‘settle’ you; or (b) check your dictionary for the meaning of apocalypse. From that wind of executive brigandage the twin evils of looting and killing have grown in leaps and bounds.

In the 50 years of Nigeria’s existence, the Babangida regime recorded the highest peacetime casualty rate of Nigerian military officers and men, many of them through coup plots, real or phantom. No one would easily forget how Babangida authorized the execution of his cerebral colleague and friend, Major-General Mamman Vatsa even as he was assuring a delegation of writers led by Wole Soyinka and Chinua Achebe that his government would temper ‘justice’ with ‘mercy’.

Courtesy of his profligacy and subversive generosity, Babangida bought a coterie of praise singers who cheered him as he dealt the deathblow to our economy and devalued the Naira repeatedly to fund his many phony schemes. One of those schemes was the elaborate scam disguised as a democratic transition programme but which was actually a grand 419 scam masterminded by the military president himself and culminating in his treacherous annulment of the June 12 1993 elections won by MKO Abiola. As can be confirmed on hundreds of websites on the subject (including the celebrated site, againstbabangida.com), Babangida thereafter crept like the coward that he actually is, to his lavishly furnished mansion on the hilltop of Minna from where he looks down on the squalor and destruction his hand had wrought below.

The tragedy of it all was that Babangida was an immensely gifted man, so gifted that he would probably have made a success of starring in Hollywood movies. He charmed you with smiling dishonesty and was so unctuous in persuading you to dig your own grave that you actually look forward to the task. Some analysts have described Babangida as a bad leader. I say NO. Babangida was worse than bad; he was evil. And nothing has happened since his disgraceful exit from power to show anyone that he has changed course. If anything, we can see clearly that on the eve of his 70th birthday he is a very bitter man totally demystified, naked and desperate. The outcome of the 419 consensus arrangement gored and disemboweled him. He is prepared to fire on all cylinders to bring the shop down if he is not allowed to run the till.

Nigeria has moved beyond Babangida. His generation thrived on playing brother against brother, pitching one part of the country against another. His time is up. Babangida was military president for eight years during which he prevented Igbos from assuming the office of the Chief of Army Staff. Indeed he disgraced Commodore Ebitu Ukiwe out of office for that officer’s principled stance on protocol. To please Abacha, Babangida sacrificed Ukiwe. Now that President Jonathan has appointed an Igbo man as COAS, Babangida is telling Igbos that if elected president he will hand over to an Igbo man in 2015. He must think Igbos are dumb. The same kind of lies he told as a young man of forty-something is what he is still parroting at 69. Since he has chosen to continue inflicting his malodorous presence in the public space, it is in order if we tell him how much he stinks.

Insha Allah, Babangida will never be a democratically elected president of Nigeria. We who have survived his first coming owe it to those who didn’t to hold this man accountable for his sins for we know that even if he gets away without sanction in this world, he would have to answer to the Unmade Maker who takes no bribes at the end of the day.

To show how valueless the Babangida brand has become, he was defeated in the 419 consensus race by a political pariah who is yet to tell us the full story about his involvement in the PTDF scandal and the Jefferson bribery scandal in the USA. Atiku’s friend and alleged comrade in crime, Congressman Jefferson is serving a jail term in America while Atiku wants to be our next president!

Both men are adept at scare mongering and mass hysteria. They delude themselves, however. Nigeria will not break up on account of a thousand Babantikus. They have divided Nigerians in the past; never again. Although Nigerians are unfairly seen as generally corrupt by outsiders, those of us who toil day and night know that majority of Nigerians are good people. And it is precisely because the good outnumber the bad that we shall soon see the total eclipse of characters like Babangida and Atiku.

I do not believe that Adamu Ciroma meant well for Nigeria by arranging an ethnic consensus candidate. The charade was not about the North. It was about protecting the interests of a few gluttons. Mrs. Sarah Jibril who offered herself to be screened was ignominiously cast aside because in the definition of the Ciromas of this world, Sarah Jibril is a woman, a Christian, a minority – and therefore not qualified to represent the ‘North’. In the same arrogant manner, they say that President Jonathan is from a minority tribe and therefore not fit to lead Nigeria. Apparently, according to Ciroma, it is okay for the rest of Nigeria to share the oil money flowing from the Niger Delta but it is not acceptable for somebody from that region to rule the country!

Ciroma could not find any Northerner in the mould of Namadi Sambo, Attahiru Jega, Lamido Sanusi, or Nuhu Ribadu to sponsor. He had to invade the cemetery of PDP has-beens and dig up putrid political cadavers to foul the political space. The Ciroma generation has been left stranded by the locomotive of Time. Their analogue machinations in the face of digital variables make them a sorry sight.

Babangida can’t offer anything new except open tribalism. He has a hefty war chest to fund his futile propaganda and load the pockets of guttersnipes like Kassim Afegbua to foul the air. Now, that is a masterstroke – a failed general teaming up with a complete nonentity, name dropper and ill-bred mendicant. Some slaves will riot if you try to undo their chains!

Babangida reminds me of the tortoise. When the tortoise was going to the market, he was asked by neighbors: “Tortoise, when shall you return from the market?”

Swinging his ugly head he replied, “Not until I’ve been disgraced….”