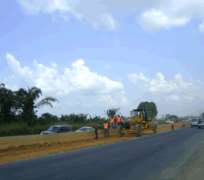 On-going works on the Lagos-Ibadan Expressway
Three decades ago when the Lagos-Ibadan Expressway was constructed, it was to make inter-state travel easier and faster. However, over the years, what the road has received from the authorities was poor maintenance and total neglect of its facilities. With this development came a near-total failure of the road, a situation that has sent many Nigerians to their early graves and left others with deformities.

Anytime the yuletide season approaches, many Nigerians who have made travelling home for Christmas and the New Year celebration a yearly ritual, usually have their hearts in their mouths. Chaotic traffic jam which lasts for hours on the road has always left a sour taste in their mouth, while activities of night marauders who take advantage of the bad road to rob hapless travellers of their possession, also make travelling on the road quite unpleasant.

The importance of a good road network has not been lost on Nigerians and this has made them to constantly clamour for total rehabilitation of the Lagos-Ibadan Expressway. But what has greeted their appeal has been hypocritical attention and undue politicizing of the state of the road.

Nigerians, however, heaved a sign of relief when the Federal Government, in April, 2009, approved the concession of the expressway to Messrs Bi-Courtney Highway Services Limited at a cost of N89, 533,688,879.84.

20 months after the concession agreement was sealed, no step was taken to rehabilitate the road.

But if the recent cheery news emanating from the concessionaire of the Lagos-Ibadan Expressway is anything to go by, then Nigerians might once again enjoy hitch free journey during this yuletide season.

According to Bi-Courtney Chairman, Dr. Wale Babalakin, SAN, extensive work has started to make the road motorable for Nigerians during the yuletide period. He also promised that upon completion of the road in four years time, Nigerians would be provided with the most user-friendly road constructed under strict international standard.

'We cannot wait a second longer to start work. The longer we wait, the more deplorable the road becomes, and the longer it takes for motorists to ply through,' he said.

Bi-Courtney is to finance the reconstruction, expansion and modernisation of the 31-year-old road under the Public Private Partnership (PPP) initiate. The Build-Operate-Transfer scheme would run for 25 years, during which the firm would manage and maintain the highway. The Lagos-Ibadan Expressway was concessioned and handed over to Bi-Courtney on May 26, 2009 by the Federal Government. The reconstruction is expected to start from the Lagos end to Shagamu Interchange of the highway; and from there to the Ibadan end.

According to Dr. Babalakin while speaking with Daily Sun , the design of the expressway had been competed and handed over to the relevant authorities for final approval. He added that a trailer park had been constructed at Ibafo, while Ogere, another problem spot along the stretch, is receiving a facelift to make vehicular movement easy.

Already, structures abutting the road at the Lagos end have been moved and heavy-duty equipment moved to sites located along the stretch of the road.

The move to make the road motorable is coming five months after the federal government ordered the firm to commence immediate repairs of bad spots on the road or face sanction.

Many critics believe the speedy repair works embarked on by the firm might be to stall any sanction intended by the federal government.

Earlier in the year, the Works Minister, Senator Mohammed Sanusi Daggash, had told Nigerians that repair works to be embarked on by the firm were necessary to reduce accidents and traffic gridlock occasioned by potholes on the inter-state road.

The minister had warned that the firm might be sanctioned by the Federal Government if it fails to start palliative works on the road.

'We are going to enforce that Bi-Courtney carries out repairs of the road. It is part of the agreement. So, it has to carry it out. Bi-Courtney has four years to complete the rehabilitation of the Lagos-Ibadan Expressway and has been told to start the palliative work of the road immediately,' the minister said.

Explaining why the firm delayed rehabilitation work on the road, the Bi-Courtney boss said work had started on the road more than a year ago and was intended to produce a first class road network.

His words: 'For us, work is more physical but a good preparation leads to a good project. A report was prepared showing the actual state of the road and the final report has been submitted to the relevant authorities. It is important to have a first class design so as to have a first class road. We want to create a world-class infrastructure that will be the pride of all Nigerians and a reference point.'

Dr. Babalakin also noted that the primary objective of the rehabilitation project is to unlock the economic potentials of the Lagos-Ibadan Expressway by developing it efficiently to carry the available traffic demand. He therefore, advised motorists to be cautious and not over-speed while plying the road due to the on-going rehabilitation.

'The company has partnered various stakeholders on the Lagos-Ibadan Expressway and trailer drivers to ensure free flow of traffic. We urge road users to follow the instructions of our traffic managers as well as road signs, which are prominently displayed. Customer services personnel for information dissemination and traffic management have been employed. We have also engaged security personnel to provide adequate support for traffic managers who are saddled with ensuring free flow of traffic,' he stated.