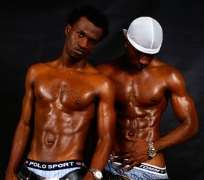 Peter and Paul Okoye of the popular Psquare group were missing in action at this year's MTV Africa Music Awards (MAMA) 2010. We gathered that it was a deliberate action by the showbiz twins who see themselves as the 'kings' of African entertainment.

When it was time to be presented with their award, a recorded appreciation message on Video was delivered by the production to the audiance. On the screen, Psquare thanked the organizers MTV for giving them the award. Psquare also said that they were absent for reasons beyond control.

Almost everyone present thought the duo had travelled out of the continent for an engagement only for us to discover that the Psquare were actually a less than 5 minutes drive away from the venue of the award. They were actually having fun with some Lagos big boys at Auto Lounge (located in Victoria Island, Lagos).

We gathered that some stupendously rich Lagos Big boys were celebrating with some Oniru children at the club. We saw luxury cars (including one that was dancing and more than eight G class Mercedes Benz cars- the price is put at about 17 Million Naira for one)

We sighted the cars of Peter and Jude their elder brother in front of the club. Some hours later, they later showed up at Tribecca Club venue of the after party of MAMA 2010.

A source later told us that the duo like to behave like demi gods in the entertainment industry. They are talented but they are too arrogant. MAMA was the biggest thing happening that night in Africa as far as entertainment is concerned. All the who is who from different places were there including D'banj and Tuface. Why would a group like Psquare such an event for a club party?

Another source told us that they didnt come because they were asking for something huge from the organizers to perform but MTV team were not forthcoming. Aside that they just don't like attending awards in Nigeria anymore. For the Soundcity Music Video Awards (SMVA) the organizers had to beg and beg before they could attend.

We gathered that ever since what they tagged the unfair treatment at one of the Hip Hop World Awards, they have found it difficult attending most awards in town. “You know they came to the award with expectations that they were going to win all but then they were highly disappointed as Ayo Animashaun and his team thought otherwise” said another person.

Well, don't us blame the guys they sure know where their bread are 'buttered'- Those Oniru Boys could take them to another level because they are just more than loaded!