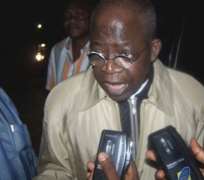 LAGOS, Dec 10, (THEWILL) - Five persons were critically injured today as an on-going Ikeja City Mall project collapsed. The mall, currently under construction, is believed to be been owned by former Lagos State Governor, Asiwaju Bola Ahmed Tinubu. Just yesterday, the Code of Conduct Bureau (CCB) addressed a news conference in Abuja, where the Bureau said the former governor “has a case to answer for keeping several foreign accounts amongst other offences.

Precisely at about 3:20 p.m, a section of the mall suddenly came down shortly after the decking of the first floor was completed. THEWILL gathered that five of the workers who were working on the first floor of the building were trapped before they were rescued.

The affected workers sustained various degrees of injuries, though no death recorded according to the rescue workers, who spoke with THEWILL at the site of the building.

The mall, which is being built, by CAPPA and DALBERTO Plc on about three acres of land opposite Elephant House is occupied by SHOPRITE, Silverbird Cinema, Kentucky Fried Chicken and various offices and shops.

Speaking with THEWILL at the site, LASEMA General Manager, Dr. Femi Oke-Osanyintolu said five people were rescued from the debris, adding that the victims have been taken to the state Accident and Emergency Centre for treatment.

“My own job is to respond to this kind of calamity quickly to ensure that we rescue our people. LASEMA is on ground. LASUMBUS too has joined. Civil defence has since been here. We are on the top of the situation.

“Only five persons were trapped, and the rescue officers have brought them out. The victims have been taken to the state Accident and Emergency Centre. No person died as a result of the incident.

“The construction company has made the roll call of the workers at the site and observed that no one is trapped except the five people that have been rescued. No death recorded as a result,” he said. Oke-Osanyintolu further explained that the government could not ascertain the cause of the collapse but that it would embark on investigation immediately to unravel the root of the accident.

He added that the state Ministry of Physical Planning “will have to visit the site to investigate the cause of the collapse while the debris is being evacuated. For now, we have sealed off part of the area where the crack occurred.” In his response, CAPPA and DALBERTO Project Manager, who simply identified himself as Christian, explained that the company would investigate the cause of the building collapse as soon as possible.

“Please understand us. We cannot tell you what has caused the collapse. We will look into it and see. But I am aware that about four or five persons sustained varying degree of injuries,” he said.