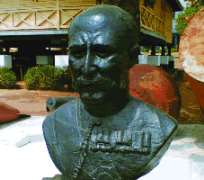 With Christmas barely two weeks away, the tourist may want to pick one or two destinations to spend a few days savouring this Yuletide season. Looking for a town that throws up hills, a plateau, two rivers and a confluence? Look to Lokoja, capital of Kogi State in Nigeria's Middle Belt area. Welcome to Lokoja, home of Mount Patti. Residents say that less than 30 years ago, hyenas used to descend from this hill to devour people's domestic animals.

Truly, there aren't many towns like Lokoja in Nigeria's North-Central geopolitical zone. Be they historical relics and geographical monuments, Lokoja has them all. Lokoja is home to a Cenotaph, where memorabilia of World War 1 and World War II are on display. This site stands on IBB Way. Aside the cenotaph, IBB Way holds many banks, restaurants, cyber cafÃ©s, and newsstands et cetera.

But you need to visit Lord Lugard Road, too. Named in memory of Nigeria's first Governor-General, this avenue, which strikes a perpendicular with IBB Way at the point, where the Kogi State Headquarters of the Nigeria Police Force (NPF) stands, is both socially and politically very relevant. Apart from the NPF, Lugard Road hosts Lugard Court, which houses Upper Area Court 2 of the Kogi State Judiciary Service, a Press Centre and guest house run by the Kogi State Chapter of the Nigeria Union of Journalists (NUJ), Kogi State Tourism Board Headquarters.

Two months ago, we returned to Lokoja, where in 1775, the famed British explorer Mungo Park had blazed the trail as the first European to set foot here. Another expedition led by McGregor Laird and Richard Lander was carried out in 1832, followed by the 1841 exploration commanded by William and Bird Allen. Subsequently, Dr. Belfour Baike and other explorers had followed suit in 1854 and 1857. The homes, offices, warehouses and other structures eventually put up by these explorers and missionaries that berthed in Lokoja would consequently transform the settlement from a village into a bustling commercial town.

Before long, the British Colonial authorities would become very interested in this settlement. Sources remind that a British consul was appointed for Lokoja in 1858 and that as far back as 1865, the British government, in recognition of the town's importance, had established a consulate here. Lokoja's place in Nigeria's political history would be better understood bearing in mind that the inauguration of Lord Frederick Lugard as Governor of the then Northern Protectorate also took place in that town on 1 January, 1900. It was in Lokoja that Mr. George Taubman Goldie, the then head of the Royal Niger Company, precursor of today's United African Company (UAC), handed over the reigns of The Niger.

Lokoja's tourist attractions include the Cenotaph, which features three heavy artillery guns and stands along IBB Way. The cenotaph was erected to honour the memory of Nigerian and British soldiers, who died in World Wars II and I; Old Prisons Yard, the tombs of deposed Emirs of Bida, Kano, Gumel and Zaria, Dockyard of the Inland Waterways Department and the Iron of Liberty monument depicting the spot, where slaves were freed in 1860 are among Lokoja's many allures. Rubbing shoulders with these monuments are ample spots, where residents and visitors alike gather to unwind, such as the Confluence Resort.

Given Lokoja's place in Nigeria's political history, it comes as no surprise that the town has so much to offer the tourist. Lokoja offers at least half-a-dozen tour sites. From many parts of Lokoja, the tourist can savour alluring sight of terraces of houses cascading down Mount Patti. But, from everywhere the observer can see three or four telecommunications masts: This is the apogee of Mount Patti and it is here the local Nigerian Television Authority (NTA) station stands.

Reliable sources say 'Patti' means hill in the Nupe tongue, and that this hill peaks at 458.3metres above sea-level. A certain Lord Frederick Lugard was the first Governor General of Nigeria's Northern Protectorate. He later became Nigeria's premiere Governor General between 1914 and 1919. A Rest House named in honour of this colonial overlord stands atop Mount Patti, and parts of the Ajaokuta Steel Complex can be seen from the top of this mountain, which also offers a good aerial view of sections of Lokoja as well as the Confluence of the Benue and Niger Rivers.

Attractions, Landmarks & Sites
Lokoja throws up innumerable tourist attractions. Nigeria's longest river, the River Niger which straddles some 4,160km from its source in the Futa Djallon Highlands on the Sierra Leone and Guinean border meets the Benue River, which flows in from the Cameroon at Lokoja. The Niger-Benue Confluence, the point where these two great rivers meet, is a Y-shaped spot. During the dry season, sandy patches of land, perfect spots for picnics, emerge from the much dropped volume of waters. However, these seasonal islands are usually submerged throughout the rainy season.

Lokoja also boasts European Cemetery. There are actually two European Cemeteries in Lokoja, and both of them stand along IBB Way. The European Cemetery located across the road from St. John's Church, Lokoja's oldest Christian house of worship; is more conspicuous and much larger. This larger of the two graveyards is located behind Kogi Traveller Motor Park, near Lokoja Local Government Secretariat. Another important monument in Lokoja is the spot, where on 31 December, 1899, the flag of the Royal Niger Company (RNC), forerunner of today's United African Company (UAC), was lowered for the last time. This site stands on Ibrahim Taiwo Road, in front of Lokoja's campus of the National Open University of Nigeria. Also, the Immaculate Conception Catholic Cathedral stands facing the historic site in Lokoja.

Travelling between the Kogi State town of Okene and Abuja, countless Nigerians have seen Lokoja, but they have only encountered glimpses of the town's fringes. Who could forget Nataco Junction, where most commuters stop to take a bite and stretch the limbs before continuing their journeys? Nataco Junction is special; for day and night this park is bustling with life, and the watchful eye can't miss the countless commuters rushing food and drinks and doing some shopping before the deafening hoots from the buses' drivers tell them its time to move on. The major restaurants, the neighbourhood numerous bars and eateries on both sides of the road ensure Nataco Park never sleeps.

While in Lokoja, the traveller can also explore Oworo Land from Agbaja, the local District Headquarters. Agbaja stands atop a plateau, which towers more than 330 metres above sea-level. Located roughly 14 km from Lokoja, Agbaja and other Oworo homelands feature relatively vernal atmosphere and is, therefore, worth visiting.

Also, the wayfarer is advised to look in at the Lokoja station of the National Museum, when in the Kogi State capital. Even, if the tourist was not out to see artefacts, he/she might still end up inside Lokoja Museum complex because the place is also home to several bars and eateries.

On a more serious note, however, Lokoja Museum is a specialized museum, which focuses on the country's colonial past, hence its name of Museum of Colonial History, Lokoja. Lokoja's Museum of Colonial History actually occupies what is rightly a monument because it is housed inside one of Lord Lugard's then senior staff quarters. Just beyond the gate, upon entering National Museum Lokoja, the sightseer will find a bust of heavily mustachioed Lord Frederick Lugard on a pedestal more than 24 inches high. Like Kogi State, the capital city throws up innumerable tourist attractions.

Unlike the smaller and rather obscure one, tucked inside the Y-junction, where Aliyu Obaje Street runs into IBB Way, the European Cemetery located across the road from St. John's Church, Lokoja's oldest Christian house of worship is more conspicuous and much larger. This larger of the two graveyards reserved for Europeans is located behind Kogi Traveller Motor Park, near Lokoja Local Government Secretariat. Sadly, one or two of Lokoja's necropolises are poorly maintained.

However, all the neglect suffered by tourist sites and cultural attractions across Kogi may be ending very soon. Kogi State Commissioner for Tourism, Mrs. Funmi Abiodun, revealed: 'Governor Idriss is finalizing programmes to invest in the tourist endowments of the state with a view to creating jobs and generating wealth'. The Governor is not alone in the attempt to breathe new life into the untapped tourism wealth of Kogi State in general and Lokoja in particular.

Where to stay
Nostalgia Hotel, where we put up at during our last two visits to Lokoja is the best, to be candid. There are many reasons we find Nostalgia so alluring; these include the roomy lodges, which are sensibly furnished, the complimentary tea and coffee as well as bottle of Coke and 75cl bottle of water on daily basis. Moreover, there's a cyber cafÃ© within the complex too, where one can browse or surf at N300 per hour or N750 for three hours and N1,000 all night.

This is a world of difference from the N3,000 we paid per hour for browsing at the cyber cafÃ© inside Transcorp Hilton three years ago! And, if the guest wants documents typed, you only pay N100 per page, whereas at the Abuja hotel it cost me N400 per page, if I recall correctly.

I also rate Nostalgia gastronomy good. Although I forgot to get the name of their chief chef, the man's cooking must be good for me to consider Nostalgia's N500, N1,000 and N1,200 fees for dessert, starters and pounded yam and fresh fish soup respectively well worth it.

Apart from these, Nostalgia offers car hire and tours services and boasts 24-hour power supply. At a daily accommodation fee ranging between less than N7,000 to roughly N20,000 this tariff is a fair enough price for a hide-away that assures you peace and is full of fun.