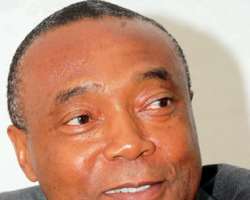 SIXTEEN current and former members of the Council of the Nigerian Stock Exchange have refunded part of the N1.35bn they received as bonus between 2006 and 2008.

The Interim Administrator, NSE, Mr. Emmanuel Ikazoboh, who disclosed this to our correspondent on Tuesday, however, said one of the members, Chief Reginald Hart, had gone to court to challenge the NSE, and so, had not refunded his share.

He said, 'Twenty-two people were asked to refund money to the stock exchange, but some of them have paid. As we speak, 16 of them have paid. Chief Reginald Hart has taken us to court, so he has not paid. One of the people involved is dead, so we cannot ask him to pay.'

When asked to reveal the amount refunded so far, Ikazoboh said,'I cannot divulge the amount paid by the council. That will be unethical. Suffice it to say that 16 out of the 22 past and current council members have paid.'

He, however, refused to give the specific names of the council members, who had paid or the amounts they refunded.

A competent source within the NSE told our correspondent that there had been 'profit sharing' at the Exchange even before 2006, noting that the money was only being given to council members as travel allowance.

An interim report of the forensic audit conducted on NSE's account had said the Exchange's council members, including its former Director-General, Prof. Ndi Okereke-Onyiuke, paid themselves N1.35bn as 'productivity/surplus' bonus between 2006 and 2008.

The SEC, therefore, directed Ikazoboh to take steps to recover all such shared 'bonuses' from the council members.

The surplus sharing, according to experts, is against Section 26(3) of the Companies and Allied Matters Act, Cap C20 LFN 2004; and Section 6 of the Memorandum and Articles of Association of the Exchange, which stipulates that 'the income and property of the Exchange shall be applied solely towards the promotion of the objects of the Exchange and no portion, therefore, shall be paid or transferred directly or indirectly by way of dividend, bonus or otherwise.'

SEC had said in a statement that such payments had been made between 2006 and 2008.

Alhaji Aliko Dangote, who was ordered to stop acting as the NSE Council President in August, was reportedly the first to return his N40m bonus share.

The SEC had appointed a law firm, Aluko Oyebode & Co; and an accounting firm, KPMG, to investigate the allegations of financial mismanagement at the Exchange.