Skills of Ghanaian footballers not forgotten 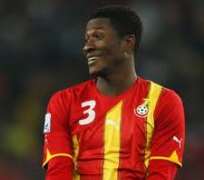 Three of the players who were outstanding in the tournament have been shortlisted for the 2010 CAF African Footballer of the year award.

One of the three Ghanaian players is Asamoah Gyan, the Sunderland striker who scored important goals for Ghana, but also painfully missed a crucial penalty kick that would have sent Ghana into the semi finals in the World Cup.

The other two are Midfielder Andre Ayew and Kevin Prince Boateng of AC Mlian.

What is clearly impressive is that the shortlist is made up of ten players from all over Africa. Egypt and Ivory Coast have two players each, in the shortlist.

There is no guarantee, however, that any of the three Ghanaians will pick the ultimate prize, because their inclusion is simply a generous recognition of their performance club and national levels this year, especially at the World Cup.

They would face a tough challenge from Cameroonian, Samuel Eto'o who is already a three-time winner.

Then there is Chelsea's Ivorian sharp-shooters, Didier Drogba and Salomon Kalou.

Another fearsome duo of Mohamed “Geddo” Nagy and Ahmed Hassan from Egypt are in contention.

The entire 2010 Caf Awards shortlist is as follows:

Additionally, the winner of each category will be decided by votes from Head Coaches or Technical Directors of the 53 National Associations affiliated to Confederation of African Football.

The Awards Gala 2010 will taken place on December 20 in Cairo, Egypt