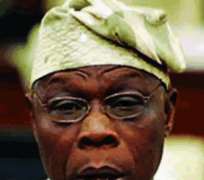 Obasanjo
The quest by Ogun West senatorial district to produce the state governor in 2011 appears to be under serious threat. This follows emerging cracks within the ranks of elders in the zone on the endorsement of former military Governor of old Oyo State, Major-General Tunji Olurin (rtd), for the governorship race.

While some members of the Ogun West Elders' Consultative Forum claimed they have endorsed Olurin, an aspirant of Peoples Democratic Party (PDP), insists that the body has not taken a position to support any of the aspirants from the zone. The disagreement is already causing apprehension in Ogun West, the home of the Yewa-Awori people. The zone has not produced the governor in the 34 years existence of the gateway state.

But the consensus candidate of the ruling PDP, Isiaka, has expressed confidence in winning the primaries of the party, as well as emerging the next governor of the state. Isiaka was the immediate past Group Managing Director of the Gateway Holdings. But no sooner he emerged the consensus candidate last September than General Olurin joined the race.

Olurin from Ilaro, the political headquarters of the Yewa/Awori is rumoured to be the favourite of former President Olusegun Obasanjo, who since the early 90's has been clamouring for a Yewa governor.

In an interview with journalists recently, Isiaka said he is not afraid of Olurin.

His words: 'I am confident of my victory not only at the primaries of our dear party, but at the forthcoming gubernatorial elections in the state. I respect people, and elders, but let me tell you that I am not afraid of anyone'.

'General Olurin is an uncle. He is someone that we are proud of; having done his best for the country even for this state. He is an elder; that's the position we put him, and we shall continue to respect him.

He said: 'I can tell you that even all that has happened has not changed that; we have tremendous respect for him. I see what's happening as an argument between a son and a father. It is not about fighting, it is not about abuse, but we shall continue to engage them in constructive issue-based argument.' Apparently reacting to an aspect of Olurin's campaign slogan, which describes him as an experienced administrator, Isiaka said: ' We also disagree with the issue of experience.

'My reason is so simple. It is an insult for anybody to say that with my little background, exposure and experience garnered in this state in the past seven and a half years, that I don't have the experience to run this state. I think that's an insult.' The PDP aspirant said he joined the race, not for personal aggrandizement, 'but because I know I can add value to the unprecedented achievements that the outgoing governor, Otunba Gbenga Daniel had recorded in the state.

'Like I earlier said, it is not about fighting or abuse, it is about issues and I will defend it to the last,' he stated.

But in what appears as a crack in the PDP, the senator representing Ogun West senatorial district, Bajomo has vowed not to step down unless the contest is determined at the primaries. Bajomo said that notwithstanding the endorsement of a consensus candidate, he would continue with his aspiration because of his 'exposure, experience, pedigree, integrity and acceptability which are the needed credentials' for the coveted position.

Bajomo's Campaign Organization in a statement issued in Abeokuta, the state capital and signed by Mr. Dapo Oke, said the timing, and the logistics for the consensus arrangement was completely wrong and 'not in the best interest of Ogun West governorship agenda and the state political situation'.

Although, the Senator was among the 12 governorship aspirants screened by the Apex Committee for the position, Oke, alleged that the endorsement does not have the widest acceptance of all the aspirants in Yewa-Awori zone.

His words: 'In the light of the latest action of the Ogun West apex committee, an emergency meeting of the Felix Kolawole Bajomo Campaign organization was convened to critically assess the issues surrounding the Ilaro declaration with special references to Ogun 2011 governorship contest and our aspirant in the race.

'The meeting after due consideration of the steps so far taken by the apex body concluded that the body had been less strategic in its dealings and does not have the widest acceptance of all the gubernatorial aspirants in the Senatorial district. 'Whereas, it is the desire of every committed Ogun West indigene to have a consensus candidate for the governorship race because of the historical antecedents of the zone towards producing the governor in the state in the past. attempts by the people of Ogun West, the manner by which the body carried out the critical assignment leaves much to be desired.

'It was evident that there was no consultation with the major stakeholders, and no negotiation with all the aspirants in the zone. This, to us is not only undemocratic, but the highest level of dictatorship in a democratic process.

'It will therefore be a disservice to the people of Ogun State, political miscalculation for Ogun West, and injustice to our political organization to keep a leading, credible and highly valued aspirant such as Senator Bajomo out of the race on a mere flimsy excuse of religious consideration, rather than exposure, experience, pedigree, integrity and acceptability, which are the needed credentials for the office of the governor of Ogun State.'

'We also call on the leadership in Ogun West to do what is right in the contest among all the aspirants who had collected the party's nomination form, with a view to harmonise their aspirations after the party's screening exercise.

'We expect the leadership to base adoption of a consensus candidate on wide acceptability of such a candidate to all the political camps, and decision taken after due consultation and approval of the major stakeholders in Ogun State PDP.'

Oke explained that the campaign organization had after massive deliberation and consultation with major stakeholders, asked Bajomo to excuse himself from the directive of the apex body, 'to continue his on-going consultations with the major stakeholders in Ogun PDP, and tour of the 20 local governments of the state in preparation for the party's screening and primary election.' He alleged that the Apex Committee did not extend courtesy to aspirants from other camps within the party, but remained glued to only the aspirants from one faction in the PDP.

Addressing a press conference in Abeokuta, the state capital, the Chairman, Ogun West Elders' Consultative Forum, Chief Ishola Olateju, said the group had reviewed the ongoing activities of various political parties in respect of the 2011 governorship race, and resolved to back Olurin's ambition. He averred that the retired general, who also served as Ekiti State Sole Administrator in 2006, possessed the track record, credibility, experience and exposure more than other aspirants from the zone.

Although the leadership of Ogun West PDP had recently endorsed Isiaka, as the 'consensus candidate,' Olateju said the elders' forum was not taken into confidence about the decision. But in a swift reaction, two members of Ogun West Elders' Consultative Forum, Chief Olawale Bankole and Chief Isaac Akinleye, faulted the purported endorsement of Olurin, saying the forum is non-partisan and has not endorsed anybody. They contended that the issue of a consensus candidate for Ogun West should be left for the leaders of political parties to handle.

They enjoined people to disregard the purported views and activities of the group 'as they do not represent the position of the Ogun West Elders' Consultative Forum.' While justifying the endorsement of Olurin, Olateju said the aspirant presented unparalleled credentials. He added: 'At our meeting of Tuesday, 19 October, 2010, the Ogun West Elders' Consultative Forum reviewed the ongoing activities of various political parties in respect of 2011 gubernatorial race in Ogun State.

'Having regard to the fact that the position of the forum is for an indigene of Ogun West Senatorial District to become the governor of Ogun State come 2011, careful note was taken that though many Ogun West indigenes have shown interest, only two PDP aspirants as of now are outstanding, namely Chief Adetunji Idowu Olurin and Mr. Gboyega Nasir Isiaka.

'To occupy the exalted position of the Chief Executive of Ogun State, the Forum gave in-depth consideration to a number of factors amongst which are track record, credibility, transparency, integrity, experience, versatility, quantifiable antecedents, exposure nationally and internationally also overall acceptability and maturity.

'The forum concluded that all these virtues manifest more in Chief Adetunji Olurin than in any other aspirant. It was therefore unanimously agreed that being the most credible and eligible candidate, Olurin should be given the opportunity to contest the 2011 gubernatorial election in Ogun State.'

However, a statement signed by Bankole and Akinleye said 'there is no where or any meeting when the authentic Ogun West Elders' Consultative Forum took a position to support any of the governorship aspirants from Ogun West.' It partly reads: 'This is because the Ogun West Elders' Consultative Forum is a non-political and non-partisan body that is committed to the overall interest of Ogun West without taking partisan position.

'That Ogun West Elders' Forum has not x-rayed or evaluated governorship aspirants from Ogun West with a view to endorsing any one of them. 'Therefore, the purported endorsement of General Adetunji Olurin (rtd) by some people claiming to be the forum is a calculated attempt to mislead and deceive the people of Ogun West.

'That the Ogun West Elders' Consultative Forum, being an arm of the Ogun State Elders' Consultative Forum under the distinguished leadership of Prince Bola Ajibola is known to be promoting peace, development and harmony in Ogun West and among the people. Therefore, it would be in bad taste and uncharitable for any member or group within the respected forum to do anything that would cause friction, disaffection and ill-feeling among the people.'