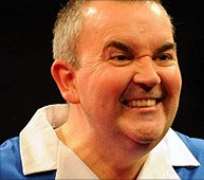 Phil Taylor will begin the defence of his PDC World Championship title against American Gary Mawson or Juanito Gionzon of the Philippines in London.

American number two Mawson and Gionzon, the current Philippines national champion, face each other in a preliminary round match.

The winner will face number one seed and 15-time world champion Taylor on the opening night, 16 December.

The Alexandra Palace event will have 72 players taking part.

The tournament features the Professional Darts Corporation's top 32 players alongside 40 qualifiers who have won their place through a series of championships held during the year or international knockouts.

The first round will be played from 16-23 December with the last 32 returning after Christmas to compete in the remainder of the event.

Australia's Simon Whitlock, who is fourth in the PDC's order of merit after reaching last year's final at Alexandra Palace, plays Steve Evans of Wales.