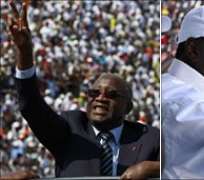 Damana Adia Pickass grabs and tears up the election results

A supporter of Ivory Coast President Laurent Gbagbo has prevented the electoral commission from releasing the first results from Sunday's run-off.

Damana Adia Pickass, who represents the president in the commission, tore up the results as the body's spokesman was on the verge of announcing them to awaiting journalists.

Wednesday is the legal deadline for the election results to be declared.

The election is supposed to reunify the country divided since a 2002 civil war.

Both former colonial power France and the US have urged the Ivorian authorities to announce the results.

The BBC's John James in the main city Abidjan says it was a moment of drama that illustrates the tension in the country, as rumours circulate alongside unofficial results from Ivory Coast's first presidential election in a decade.

The election commission spokesman Bamba Yacouba had been about to release the results from three of the country's 18 regions.

He said the results had been approved by the commission.

But Mr Pickass denied this, saying there had been an “electoral hold-up”, as he seized the paper from Mr Yacouba's hands before tearing them up.

Security forces then forced journalists to leave the commission's headquarters.

There is also a heavy security presence on the streets of Abidjan.

Supporters of opposition candidate Alassane Ouattara have accused President Gbagbo of trying to “confiscate power” by blocking the announcement.

Mr Gbagbo's supporters, however, say they will refuse to recognise the results from the north, where Mr Ouattara is popular and which remains under the control of former rebels, who seized the region in 2002.

She also said that French forces would be able to intervene if French nationals or interests were affected.

France retains close economic ties to its former colony but Mr Gbagbo's supporters have previously accused France of bias and French targets have been attacked.

Our reporter points out that the UN peacekeeping mission has copies of the results from all the polling centres and will be able to verify if what is published by the commission corresponds to 20,000 individual results.

Both sides have accused each other of intimidation and fraud and at least three people were killed on Sunday.

'Stuffed ballot boxes'
The election commission had said it was to start announcing the rest of the results on Tuesday morning.

But when the results were not released, Mr Ouattara's spokesperson said the delay would “drive the country once again into chaos”.

“There is an attempt to prevent the electoral commission from declaring the results. The officials from Laurent Gbagbo's camp have put up resistance,” Albert Mabri Toikeusse said.

The head of Mr Gbagbo's party said they had the right to contest the vote in three regions in the north.

The result is expected to be extremely close – testament to the fact these are the first open democratic elections the country has seen in 50 years since independence.

The two candidates represent the two sides of the north-south divide that exists religiously, culturally and administratively, with the northern half still controlled in part by the New Forces soldiers who took part in the 2002 rebellion, our reporter says.

The elections have been cancelled six times in the past five years.