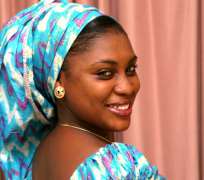 Former Vice President Atiku Abubakar recently pulled politicians and moneybags from different parts of the world to the wedding of his beautiful daughter, Bilikisu Atiku Abubakar to Adamu Modibo.

Bilikisu according to information, works with one of the leading telecommunications company in Nigeria, Globacom. She studied in Switzerland before proceeding to Brunel University.

Her husband is a lawyer, investment banker and the Chief Executive of Sigma Pensions Limited, Abuja.

The wedding was a congregation of some of top ally of the former Vice President of Nigeria. The likes of Senator Ben Obi, Otunba Johnson Oyewole Fasawe, General Ibrahim Babangida. The Presidential aspirant on the platform of Labour party, Chief Dele Momodu was also at the event.

At the moment on Facebook, some people have criticized the Ovation publisher for attending such function. Other simply think that there is nothing bad in Bob Dee as he is fondly called attending another Presidential aspirant's daughter's event.

Those in the first school of thought believe that if Momodu is 'hobnobbing' with the camp of Atiku then there is no way he would defend himself from benefiting from Atiku and his camp especially now that the former VP is facing allegations right left and centre on money laundry.

Which ever you look at it, Bob Dee tells those who care to listen that he was duly invited to wedding and he attended. A gentleman will do the same, as politics is not a do or die affair or what do you think?