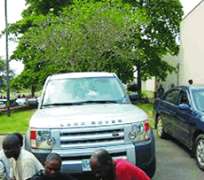 Chime & Nwodo
'Et tu Brute? (You too Brutus?)' That was the cry of horror and shock on the lips of Julius Caesar, the Roman Emperor, after his bosom friend, Brutus, had delivered the last of the sword blows by the conspirators who killed him in the Senate centuries ago. Brutus' action was seen as the height of treachery and villainy, for if Caesar had expected anyone to save him from the evil plot, it was this 'friend.'

Busayo Oyebanji and Babatunde Oluwasanmi would seem the 21st Century incarnations of Judas and Brutus. Both men are in the net of the Oyo State Police Command for allegedly leading a five-man kidnap gang to abduct and traumatize the wife, two children and a sales girl of their cousin, in whose house they had wined and dined, for a N100 million ransom

In fact, Iyanuolapo, one of the kids, had been the little bride at Oyebanji's wedding at which her dad stood as the groom's father last year.

Both Oyebanji and Oluwasanmi who hail from Ilara Ijesa in Osun State had also enjoyed the Adenijis' generosity and assistance over the years and were always welcome guests at the family house at Elebu Oluyole Extension area of Ibadan.

Indeed, according to the victim, Mrs. Bisola Adeniji, her husband, a quantity surveyor who works at Port Harcourt in Rivers State, gave Oyebanji N20, 000 to settle hospital bills when the former's wife delivered a baby recently.

But, greed and envy left the duo unsatisfied with what Adeniji, who they call 'brother' and consider well-to-do, was able to do for them. So, together they plotted with one Tope Edward Ogunsuyi and recruited two more persons – one Raymond and another whose name was not given, for the dastardly act.

An oblivious Mrs. Adeniji, returning from work with her two kids- Iyanuolapo (4), Iyinoluwa(1) and her sales girl, Tayo Salami, had entered the house at about 7.30 pm and was about locking the door from inside on the fateful day when the hoodlums descended on her and the other victims.

She narrated her ordeal: 'I was trying to lock the door back when they pushed me back and on the floor. They tied our hands and began searching everywhere. They took my handsets, trinkets, money, my children's dresses and shoes. They packed everything. All this while they tied our hands. They then asked me, where is the N100 million? They threatened that they would kill us if I didn't give them.

'It was then I feared that they would kill us, because we didn't have such amount of money. Even if you cost all what we have, we are not worth up to that.'

The hoodlums subsequently blindfolded their victims, took them in Mrs. Adeniji's vehicle, a Land Rover registered as Lagos KP564EKY and drove them to their hideout in Akobo Oju Irin, a suburb of Ibadan.

'Actually, I didn't know it was Ibadan, because they kept driving round and round and I thought we've been driven outside Oyo State. It was when the police came to rescue us that I recognized the location of the house we were kept,' Mrs. Adeniji reported.

She and her kids and sales assistant were in captivity for three days, during which they were fed with fast food bought from a fast food outlet.

Meanwhile, the kidnappers had phoned her husband, asking him to pay N100 million, if he hoped to see the hostages alive.

They also seized the opportunity to visit Mr. Adeniji's ATM account where they cashed several amount, totalling N380, 000. They had obtained the ATM card and pin number from her under duress, threatening to kill her if she refused.

By this time, however, the police, who had been alerted on the kidnap by Mr. Adeniji and neighbours, had deployed detectives, who, with the aid of a tracking device in it, were able to track the Land Rover where it was concealed at Plot 11, Road L, Olubadan Estate, Alakia in the metropolis.

One Mr. Adeleke Adebayo and his wife who lived in the house were arrested. When interrogated, they confessed that Ogunsuyi, a friend, who coordinated the kidnap brought the vehicle there for safe-keeping.

A police team later stormed the kidnappers' hideout at Akobo Oju Irin, where they rescued the hostages at about midnight on Wednesday, November 17.

Recalling how they regained their freedom, Mrs. Adeniji said she was initially afraid when the policemen entered the premises and started calling her name to inquire if she was there.

'We didn't know it was the police. They (kidnappers) had warned us not to answer, saying the callers could be the human parts dealers they had wanted to sell us to. They said since my husband had agreed to pay them the money, they were not interested in selling us to them again. But, when the police kept calling: 'Mummy Iyanu, are you there, my daughter just replied, shouting, ' yes, we're here!''

The three suspects keeping watch over the hostages then climbed to hide in the ceiling.

'It took about two hours for us to get them down, because we didn't want to use firearms so as to get them and others alive,' said the Oyo State Police Commissioner, Baba Adisa Bolanta, who paraded the suspects at the State Command Eleyele, Ibadan.

Speaking with Daily Sun, Oyebanji, who claimed to be an Accounting graduate of the Polytechnic Ibadan now into rental business, confessed that he and his cousin, Oluwasanmi contracted Ogunsuyi, a fashion designer for the crime to get some money out of Adeniji.

He admitted that Adeniji had been of great assistance to him, regretting that he did not know what pushed him into the idea.

Oluwasanmi, who spoke in similar vein, said he was drafted in to the evil scheme by Oyebanji and his friend Ogunsuyi.

Mrs. Adeniji said she was both shocked and disappointed when she discovered that her husband's kinsmen were behind the ordeal.

According to her, Oyebanji even came to her shop the morning of the fateful day she was abducted.

'It shows some people are not to be trusted. This was a man my husband gave N20,000 to settle hospital bills when his wife was delivered through surgery. This apart, there have been several helps my husband did to him,' she added.

Bolanta said the arrest of the suspects should be a warning signal to prospective criminals to dump the idea, as the risk of being caught was high.

He said the suspects would be charged for both kidnapping and robbery, due to the forceful dispossession of Mrs. Adeniji's money and valuables by the gang.

The police chief also vowed to recover the stolen items including another N215,000 cash, cheque books, jewelry, dressed and shoes stolen from the victim's house and prosecute their criminal receivers along with the suspects.

PIX3 SHOWS ANOTHER SUSPECT WITH THE STOLEN MOTORCYCLE