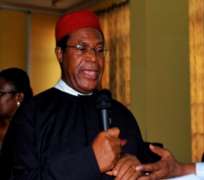 ABUJA, Nov 26, (THEWILL) - The National Chairman of the ruling Peoples Democratic Party (PDP), Dr. Okwesilieze Nwodo has urged the church and the clergy to pray for Nigeria, for the success of the forthcoming general election in 2011.

Dr. Nwodo told a gathering of Catholic Church leadership in Port Harcourt, Rivers State on Thursday after being conferred with the Pontifical Honours at the 6th Convocation ceremony of the Catholic Institute of West Africa that more than ever before this country needs all the prayers to get it right through 2011 elections.

A statement from Nwodo’s Media Assistant, Ike Abonyi quoted him as pleading with the Church to hand over the next year’s general election to God through their prayers because without democratic development would suffer great setback.

He said that the body language of President Goodluck Jonathan, his actions through the appointment of Prof. Attahiru Jega and swift release of funds to the Independent National Electoral Commission (INEC) among others shows government’s determination to put things right.

But Nwodo said that even with the Presidential determination, the entire process still need prayer for God to frustrate the efforts of those who would want to torpedo it. The National Chairman said that his Party being the ruling and the biggest are aware of the importance of their getting it right hence the National Working Committee (NWC) resolve to carry out some reformation in the Party that would imbibe internal democracy, level playing ground for all contestants and zero tolerance for all forms of electoral offences.

Dr. Nwodo, a Knight of St. John International of the Catholic Church got the award along with some other prominent Nigerians following a recommendation from the Catholic Bishops of Anglophone countries of West Africa.

Meanwhile Dr. Okwesilieze Nwodo on behalf of the entire members of the National Working Committee (NWC) has congratulated the Governor of Sokoto State, Alhaji Aliyu Magatakarda Wammako over his victory at the Supreme Court in the case instituted against him by defeated candidates in the last governorship elections. “This victory is a triumph of the will of the people as freely expressed in the election. We therefore call on all citizens of Sokoto State to rally round the Governor to continue doing the good works for the people of Sokoto State now that the distractions of the Court case have been set aside,” he said.

He said the PDP regrets the decision of the Appeal Court, sitting in Ibadan to award the Governorship of Osun State to the Action Congress of Nigeria (ACN). “We call on our supporters who are no doubt shocked by this judicial decision to remain calm and maintain their bond of unity with the hope of reclaiming the state in the next round of elections,” he said.