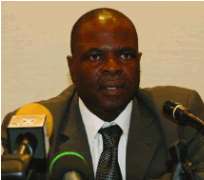 Adamu
FIFA's executive committee suspended member, Dr. Amos Adamu, has questioned the decision of the Nigeria Football Federation (NFF) to nominate one of its former chairman, Alhaji Ibrahim Galadima, to replace him on the board of the Confederation of African Football (CAF) executive committee.

Dr. Adamu, who is under ban from all football activities at local and international levels, according to FIFA's directives, told Daily Sun sports in a telephone chat Wednesday that he was at a loss as regards the action of the NFF board which made the nomination, pointing out that it does not show that the NFF is interested in his appeal.

'FIFA took its decision but I'm not satisfied with it and the next thing I hear is that the NFF leadership has nominated Alhaji Ibrahim Galadima. I just don't understand what NFF is doing when it is aware that I have decided to appeal the verdict of the Ethics Committee of FIFA.' The former Director General of the National Sports Commission, NSC, noted that it is an unfair thing to do and it would create confusion if his case sails through. He noted that it was rather ambigious for FIFA to clear him of corruption charges and yet slam a 3-year ban.

'I have nothing against Alhaji Galadima, who has been working with CAF over the years but his nomination for the executive committee at this time is not appropriate. I'll leave the federation to its action and just watch as things unfold,' Dr. Adamu stressed. FIFA had on November 18, 2010 under the chairmanship of Claudio Sulser (Switzerland) passed the damming verdict on Adamu and five others. Those who made up the panel were: Petrus Damaseb (Namibia), Juan Pedro Damiani (Uruguay), Dominique Rocheteau (France), Dali Tahir (Indonesia) and Robert Torres (Guam),

prohibiting them from participating in any football-related activity (administrative, sports or any other). They were said to have breached various articles of the FIFA Code of Ethics.

Others who fell under the FIFA's hammer are: Slim Aloulou (chairman of the FIFA Dispute Resolution Chamber and member of the FIFA Players' Status Committee) who was banned from taking part in any kind of football-related activity (administrative, sports or any other) at national and international level for a period of two years.